The LG G4 seems to be on a roll today when it comes to appearances and leaks. After we saw the device in some real life photographs, and an appearance in an official promotional video by the manufacturer, it has made yet another appearance. Rather than present information about the G4's specifications or design, this bit of information is about the pricing details for the LG G4. 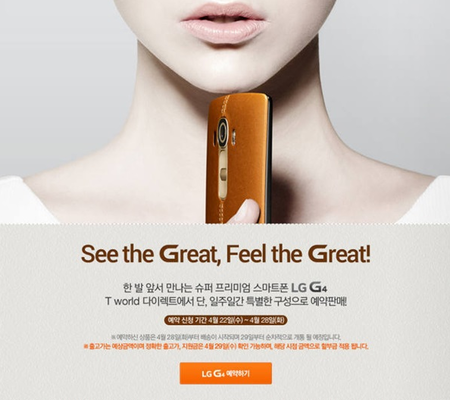 According to some fresh new information, the LG G4 will be charging a little bit more for the G4 than previously expected. The device got listed on Korea's SKTelecom, LG U+ and KT for pre-order yesterday and the pricing managed to surprise quite a few of us. According to the listing, the LG G4 will be available for $825, which makes it higher than the one put by Samsung on the Galaxy S6 Edge. LG seems to be quick to elaborate on the matter however, with a company official having spoken to ETNews on the matter.

According to the report, while the price of the G4 quoted above isn't final by any means, but the company expects it to stay within the same range. Meaning that while you should expect it to go down a couple of dollars, but don't expect any dramatic changes to the figure above. Given that LG's chosen to skip the Snapdragon 810, and the Snapdragon 808 while does pack six cores, but shouldn't prove to be a match for Samsung's Exynos 7420, LG's decision for such a price tag might end up doing the company more harm than good. According to the official quoted by ETNews, the reson for such a high pricing is that the company believes the G4 stands in the same category as Samsung's Galaxy S6 Edge. Whether this turn out to be true, we'll find out soon enough. Stay tuned, we'll keep you updated.