Looks like there's a lot to be seen at the upcoming CeBIT 2011, soon to be held between 1st to 5th March this year. Apparently, Thermaltake will be showing off their best and latest products namely the flagship full tower Level 10 GT, their Toughpower Grand power supplies as well as their massive 240w cooling solution, the Frio OCK, which will be released in two weeks time. Thermaltake is clearly out to set the best standards in the industry, and it shows how much they mean those words! 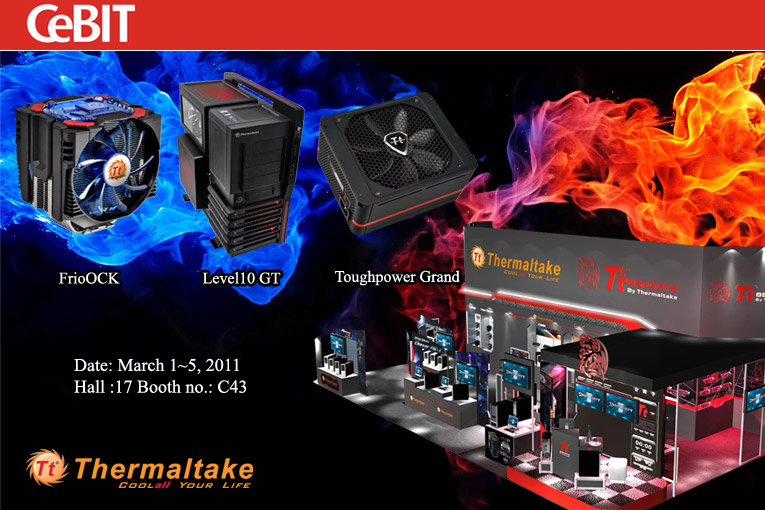 When the world's largest computer trade show CeBIT 2011 in Hanover, Germany will open its doors again from March 1 through March 5, Thermaltake will showcase a variety of their latest and greatest power supplies, cooling solutions and PC chassis such as the flagship full tower Level 10 GT, which will be show cased for the first time on Europe's biggest trade show. The daringly futuristic and visionary design concept of the Level 10 Extreme Gaming Station has won all major global design awards (red dot, Taiwan Excellence, iF, G-Mark, IDEA), making it the first PC chassis receiving such worldwide recognition. At the CeBIT 2011 Thermaltake is continuing this tradition by introducing the Level 10 GT and thereby extending the highly acclaimed iconic design concept into the main stream segment.

Furthermore the latest addition to the popular and award winning Toughpower Grand line of high-end PC power supply units, the Toughpower Grand in 850W, 1050W and 1200W versions will be shown in Europe for the first time. With this expansion into higher wattage segments, Thermaltake's flagship power supplies are now also catering to power-users and demanding eSports athletes whose gaming rigs are typically equipped with multiple graphics cards and multi-core CPUs.

As for the CPU cooling solutions, Thermaltake's brand new overclocking air cooler, the Frio OCK will be on display some two weeks before its full market availability. With a heat dissipation capacity of more than 240W the Frio OCK is clearly leading the pack and sets new standards within the industry