Sharkoon, a maker of many pc modding products and accessories such as PC cases, fans, PSU's and external enclosures have just announced their new additions to their ATX PC Cases section under the name Scorpio! These new cases support SSD's as well as other 2.5 inch form factors without any need of special frames! The two new chassis are under the names Scorpio 1000 and Scorpio 2000. These offer a wide choice of options for the enthusiast with the prices at quite a competitive level. Can't wait to get my hands on one soon! 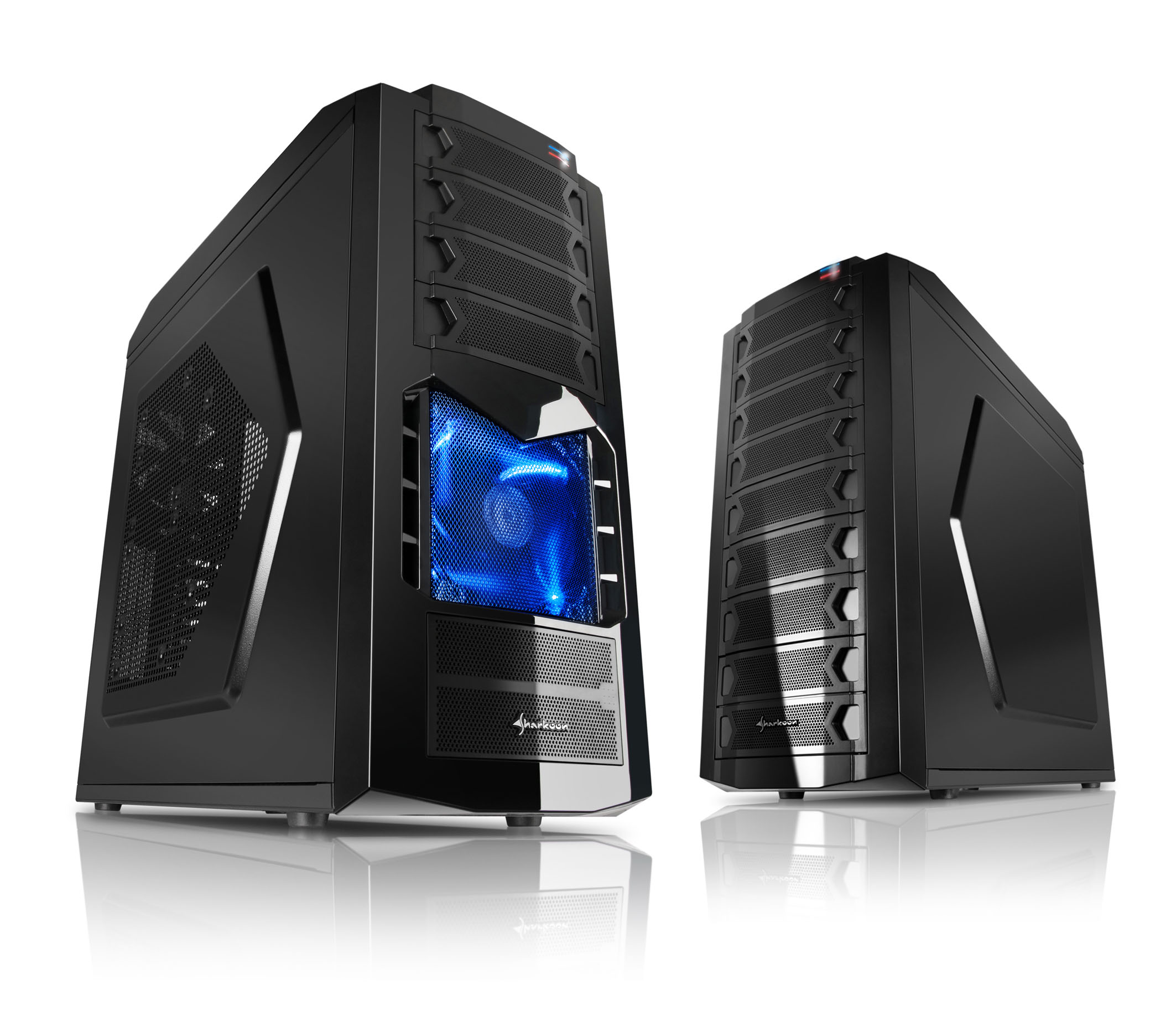 With the Scorpio, Sharkoon presents their first tower in which SSDs as well as hard drives with 2.5 inch Form Factor can be used without any special adapter frames needing to be installed: Behind the mesh drive faceplates on the completely black SECC tower are four drive bays for suitable smaller data mediums. In addition, there is space for a total of six 3.5 inch drives. Two of the six 3.5 inch mounting bays are equipped with a Fast Swap Mechanism directly on the housing front which enables the easy installation of SATA hard drives: Installed on the backside of the mounting cage is a panel with two internal SATA ports. The user only needs to open the faceplate panel, remove one of the two secured mounting frames using the locking lever, screw the hard drive to the frame and re-secure into the bay. The tower panel provides a 4-pin power supply adapter and two unregulated fan connectors beside the two SATA connectors. 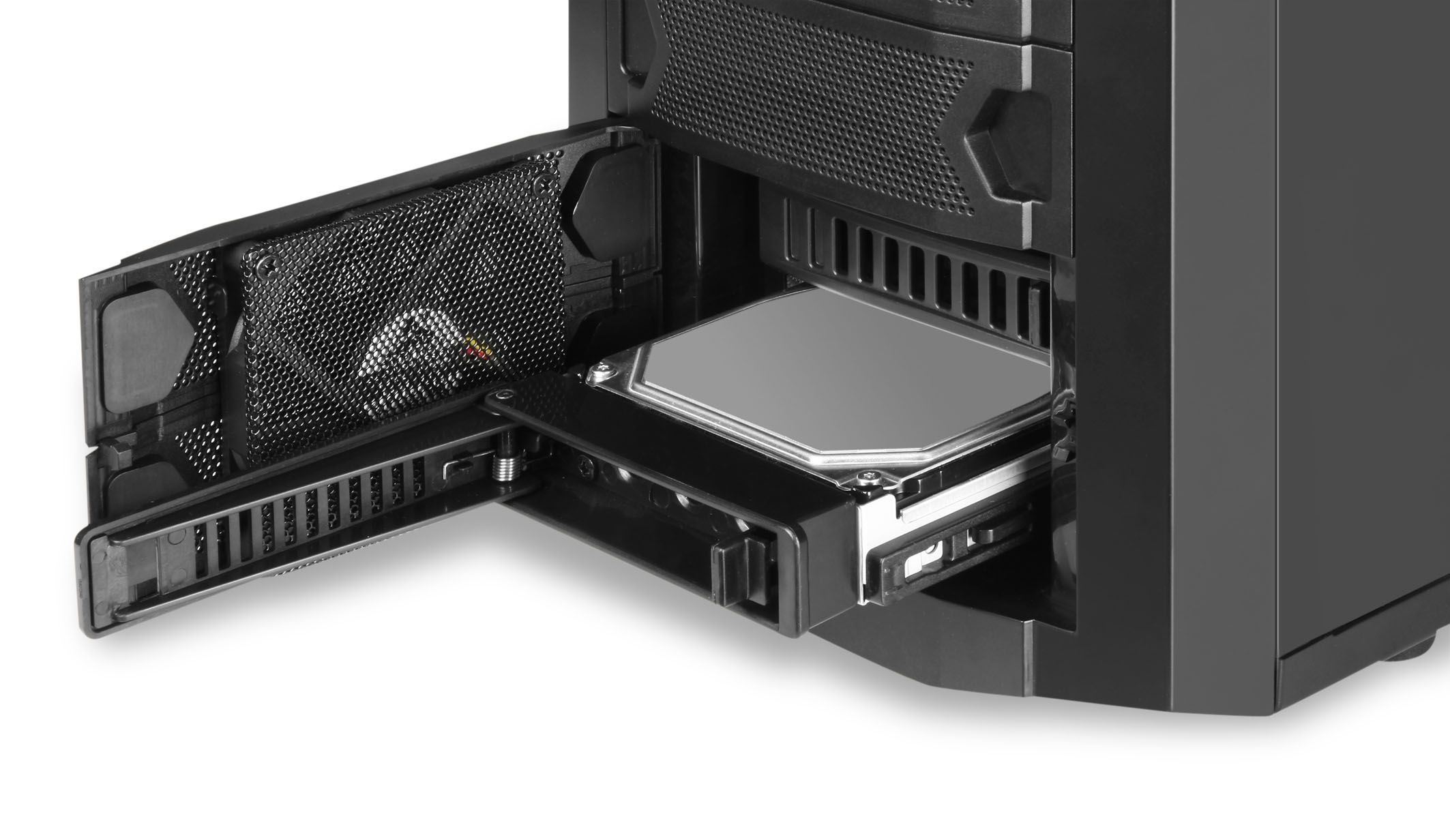 In addition to the hard drives, the Sharkoon Scorpio can include up to seven extension cards and up to five 5.25 inch drives. The drives can be secured by thumbscrews thanks to the laterally adjustable mounting rails.

For a clean cable management system within the black finished interior there are several cable bays and feed-throughs provided. The main board panel also has an opening to easily mount a CPU cooler. Through the rubber protected openings on the back of the tower an e-SATA cable and two water cooler hoses can be installed. The power supply sits on the bottom of the tower over the air intake with a removable dust filter and allows, depending on the preferred ventilation, the fan to be installed in either an upward or downward position. The top I/O panel provides an eSATA and two USB2.0 ports, headphones and microphone ports as well as the Power and Reset buttons. The tower measures 508 x 210 x 503 mm (L x W x H) and weighs around 7.25 grams.

Sharkoon offers the Scorpio on the market in two versions which differ in the fan and front panel design. The Sharkoon Scorpio 1000 comes with a high gloss plastic front frame. The mesh design of the drive panel is broken through by the preinstalled, blue illuminated 120mm LED fan which cools the upper removable hard drives. Another 120mm fan is installed on the backside. Optionally, a 200mm or two 120mm fans can be attached to the left panel using the provided mesh grill, plus two 120mm or two 140mm fans on the top.

The front edging of the Sharkoon Scorpio 2000 consists of matte finished plastic. For hard drive cooling a blue illuminated LED fan is also preinstalled, the difference between its counterpart the Scorpio 1000 is that it features an edge length of 140mm and is mounted behind the mesh drive covers. Additionally, an 80mm fan cools the SATA hard drive in the Fast-Swap-Bays. Also, the Scorpio 2000 provides a 120mm fan in the back and pre-drilled holes for a 200mm or two 120mm fans on the left side and two 120mm or two 140mm fans on the top.