G.Skill had announced new DDR3 Dual Channel kits under the RipjawsX series that have been specifically engineered for the Sandy Bridge platform. Apparently these new modules go upto 2300 Mhz at CL7 on 1.65v! Now that's FAST! 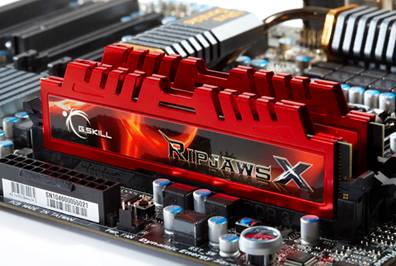 Building on the strong success of the first generation Ripjaws brand in performance memory kits, every single RipjawsX memory kit is hand-tested on an Intel Sandy Bridge platform in accordance with G.Skill's strict internal testing procedure, to ensure the best in class performance, compatibility and reliability across a range of popular motherboards. It is the perfect memory solution for PC gamers, performance workstations, enthusiast power users and anyone who loves the cutting-edge of technology! The following list shows the detail specifications of G.Skill RipjawsX family.