You Can Pre-Register A 24-Karat Gold iPhone 6s Already

The iPhone 6s is not here yet, and Apple is yet to announce it in September, on the 9th, if different reports and rumors flying around are to be believed. And like the iPhone 6 and the one before it, the iPhone 5s, it's a given that the company will release a anodized gold variant of the handset. But, if you reside in the top 1%, then it's likely that you would want to push your gold game up a notch, and one company is already giving users a chance to pre-order the iPhone 6s plated in 24-karat gold, along with an Apple Watch as part of a gift set. 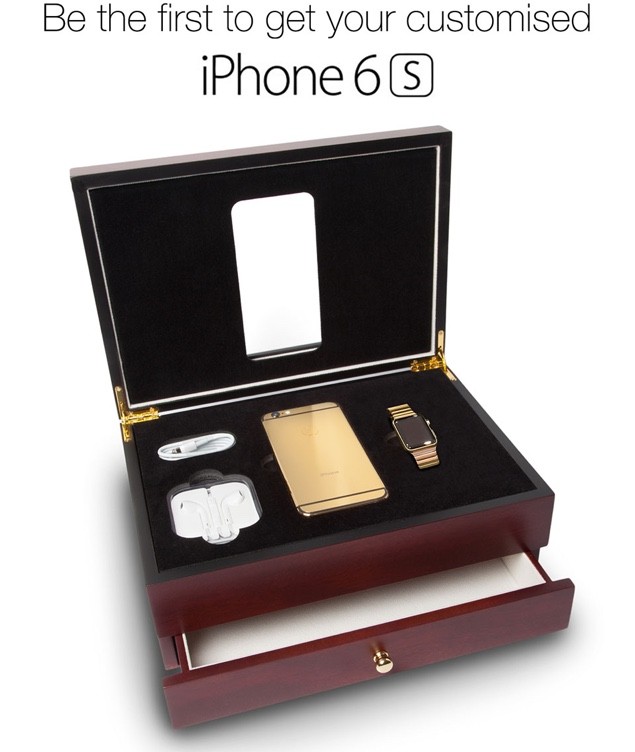 The company in question is Goldgenie, and is already informing users that it would be offering the iPhone 6s plated in 24-karat gold, rose gold, and even platinum, if that's the route you want to take. The company also says that you can get the gold laden iPhone 6s on its own or as part of a gift set "with a matching luxury customised Apple Watch."

As soon as the new iPhone 6s launches, Goldgenie will be offering its signature luxury customised versions of this highly anticipated smartphone. The iPhone 6s will be available in lustrous finishes of 24K Gold, Rose Gold and Platinum in Goldgenie’s classic elite models with a mirror like shine.

The thing here to note is, Goldgenie has no clue of Apple's inside plans regarding the iPhone 6s, and we're certain that its offering is based on previous timetables of Cupertino's release plans. Furthermore, the timing of this news is somewhat interesting, given the fact we are dead close the announcement of the device itself. But the interesting bit here is, the company even has a counter on its website, which states that after 5 days users can place a pre-order for their gold plated iPhone 6s.

We're pretty certain that the 24-karat iPhone 6s will cost thousands of dollars, given how the Apple Watch Edition starts from $10,000 and goes up to $17,000 for the high-end variant.

Goldgenie hasn't given out any sort of pricing details as yet, and anything regarding the cost at this point would be a completely wild guess.

But the big question here is: would you buy a 24-karat gold plated iPhone 6s when it comes out? Let us know in the comments section below.