PowerColor has once again launched a dual core graphics card based on their Devil 13 design, the Devil 13 R9 390. The Devil 13 R9 390 is a Dual-GPU based graphics card featuring tremendous amount of performance and a gigantic cooling system that spans three slots. The design of the card requires is such that it requires an array of 8-Pin power connectors and has a minimum power requirement of 1000W. 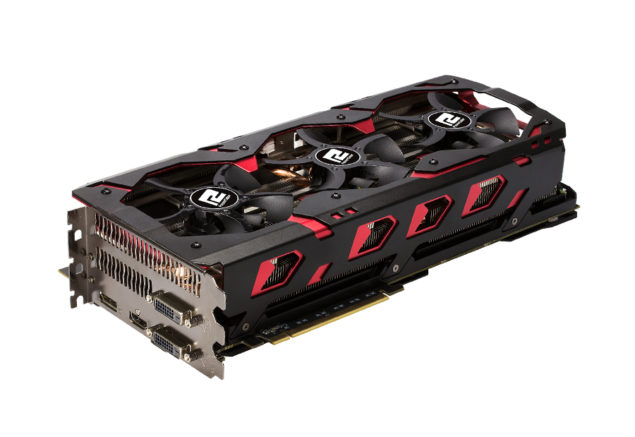 The PowerColor Devil 13 R9 390 is a completely new graphics card since its based on two Grenada Pro chips. The Grenada Pro which is a revised SKU of the Hawaii Pro graphics chip, features lower power consumption and better thermal specifications due to a improved AISC design and efficient power management systems. The Dual Grenada Pro chips on the Devil 13 R9 390 pack 2560 stream processors, 160 texture mapping units and 64 raster operation units per chip. These amount to 5120 stream processors, 320 texture mapping units and 128 raster operation units on the entire board. The core is clocked at 1.00 GHz. The memory per chip is 8 GB GDDR5 making a total of 16 GB on board VRAM, running along a 512-bit x 2 bus interface and clocked at a 5.4 GHz effective memory clock (1350 x 4). Each core has 345.6 GB/s bandwidth and the total bandwidth on the board is 691.2 GB/s.

In terms of power consumption, the board still requires a large amount of power to feed the dual Grenada graphics chips along with the power circuitry featured on the PCB. We are looking at no less than four 8-Pin PCI-Express connectors powering the board which puts the total wattage to 1275W and the minimum power draw is suggested around 1000W. So you are going to need a beefy Power Supply if you want one or two of these beasts running inside your rig. According to PowerColor themselves, the PCB is a neat and clean design which leaves room for overclocking. Some words from PowerColor themselves about the PCB are mentioned below:

PowerColor Devil 13 Dual Core R9 390 is built with carefully-designed Platinum Power Kit and ultra-efficient thermal design. It consists of massive 15-phase power delivery, PowerIRstage, Super Cap and Ferrite Core Choke that provides the stability and reliability for such high-end graphics solution. To support maximum performance and to qualify for the Devil 13 cooling system, 3 Double Blades Fans are attached on top of the enormous surface of aluminum fins heatsink connected with total of 10 pieces of heat pipes and 2 pieces of large die-cast panels. This superb cooling solution achieves a perfect balance between thermal solution and noise reduction. The PowerColor Devil 13 Dual Core R9 390 has the LED backlighting that glows a bright red color, pulsating slowly on the Devil 13 logo. via PowerColor

PowerColor has featured the same cooler they used on the Devil 13 R9 290X graphics card. With a massive triple slot cooler which is longer in length and much more wider compared to the reference Dual-Chip card offerings, the Devil 13 R9 390 features a triple slot, PWM controlled, triple fan design with the fans measuring 100mm that circulate air through a gigantic and dense aluminum fin array which features 10 heatpipes. This shroud is huge with strikes of red and black all around the surface while a large Devil 13 backplate supports the card from behind cooling the additional power components. The backplate is a nice touch to the card. The only thing odd about the Devil 13 R9 390 is that PowerColor went with the Grenada Pro version and not the XT GPU. The Grenada XT which is based on the Hawaii XT design was already featured on the Devil 13 R9 290X so it does make little sense to feature the Pro variant on their new card. Maybe we will see a Fiji XT based Dual-GPU card from PowerColor in the future.