A Kickstarter campaign was launched for Power Drive 2000 a few days ago, an '80s Sci-Fi inspired arcade racer which looks absolutely freaking cool.

Power Drive 2000 is an arcade racer set in the year 2000...the future! Get behind the wheel of a technologically advanced space-age sports car and tear it up as you battle to become A-number-1! The game features many unique and thrilling game modes set in a 1980's cinematic scf-fi world and boasts a totally radical Synthwave soundtrack!

It also has a talking car...

The gameplay in Power Drive 2000 is easy to learn, difficult to master. The two main game mechanics are drifting and boosting. The player has to drift around those tight corners to charge the "Turbo" meter and boost to gain some wicked speed! Master these two things and you will rise above the competition!

Race Mode
Standard race against the clock or challenge a player's ghost from the leaderboards.

Collector Mode
The player's score is based on time and how many diamonds are collected during the race.

Outrun Mode
Weave in and out of traffic as you try to outrun a police chopper through the streets of an 80's cyberpunk and neon city.

Vaporizer Mode
The walls of the track are lined with a laser fence. You touch them and it's game over. No checkpoints. Not for beginners.

Gauntlet Mode
Dodge obstacles in a procedurally generated environment as you try to escape a giant laser wall barreling towards you. Different from most 'runners' as you will have to make 90 degree turns and travel parallel to the deadly laser wall you are trying to outrun.

Turbo Mode
The player will start the race with unlimited 'Turbo' for boosting.

Multiplayer
Online and local multiplayer support. The player can also challenge ghost plays from the leaderboard. 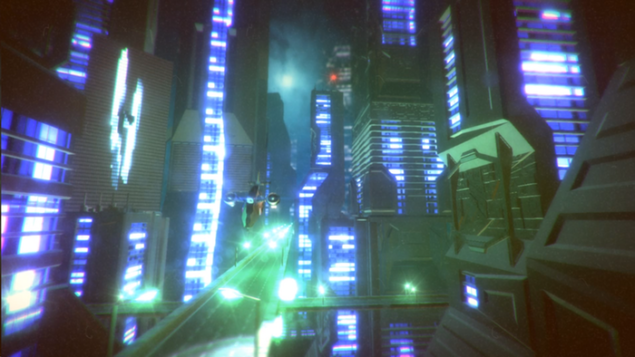 The Avenger 2000, built by Hyperdyne Motors, is specially designed with an integrated artificial intelligence known as C.A.T. (Computerized Autonomous Technology).

CAT not only makes sure all the mechanics and electronic systems in the vehicle are performing optimally, she will also provide the driver with suggestions and encouragement about their driving. However, she is known to be rather sassy sometimes...

The soundtrack is an awesome mix of unparallelled Synthwave artists. This music selection wasn't an afterthought; it helped shape the vision of the game from the beginning. Here is the first wave of artists on the soundtrack.

Be sure to support Power Drive 2000 at its Kickstarter page.