Many people think Popcorn Time is dead, and rightly so, after its creators laid down their arms and killed the service. However, there is a saying that once its on the Internet, it stays forever. A few days later the project was picked up by the guys behind YIFY torrents and given new life. The source code was available on Github and from there, Popcorn Time was reborn. However just now it has added support for TV Shows, which now makes it the perfect piracy software on the face of Planet Earth. Netflix and Hulu beware, your worst nightmare is back form the dead and this time, it appears invincible. 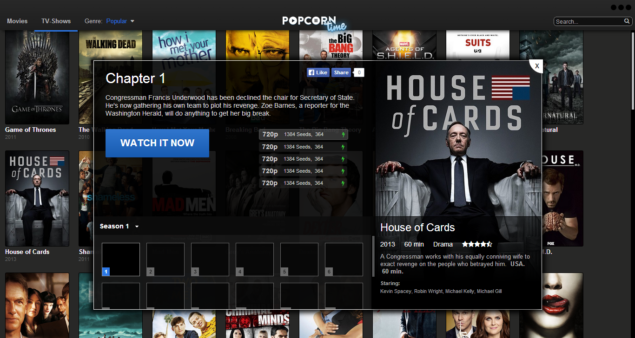 Dead? Nope, not even close.

An open source piracy program is nothing less than a Hydra. You cut of one head, two more will appear. Banning such a program is realistically impossible to do so, that is without a complete Internet censorship program (which thankfully isn't possible). The new popcorn time currently supports the PC platform, the Linux platform and even the Mac platform. Their site indicates that an android version will soon be up in a matter of days.

The newly added TV Show has an unbelievable selection of TV Shows although since this feature is in beta many of the shows have not been connected with their feeds. However rest assured all of the popular shows are working very well. For e.g. the entire House of Cards and GoT series works flawlessly.  The movie section is simply perfect, while the TV show section still has some bugs that need to be ironed out; but the speed at which Popcorn Time is progressing leaves no doubt that these will be gone by next update. The team has also added a very comforting (to some and downright terrible to some Hollywood peeps) statement: "This Service will never be taken down."Now we don't endorse piracy, but rather than downloading some shady, virus ridden program, we will link you to the real deal. Which by the way can also be arrived at by Googling Popcorn Time (the second link). New Popcorn Time Download Link.

Popcorn Time To Be Blocked in the United Kingdom