Playtonic on Introducing New Things to the Genre; No PS4 Pro Patch Planned for Yooka-Laylee 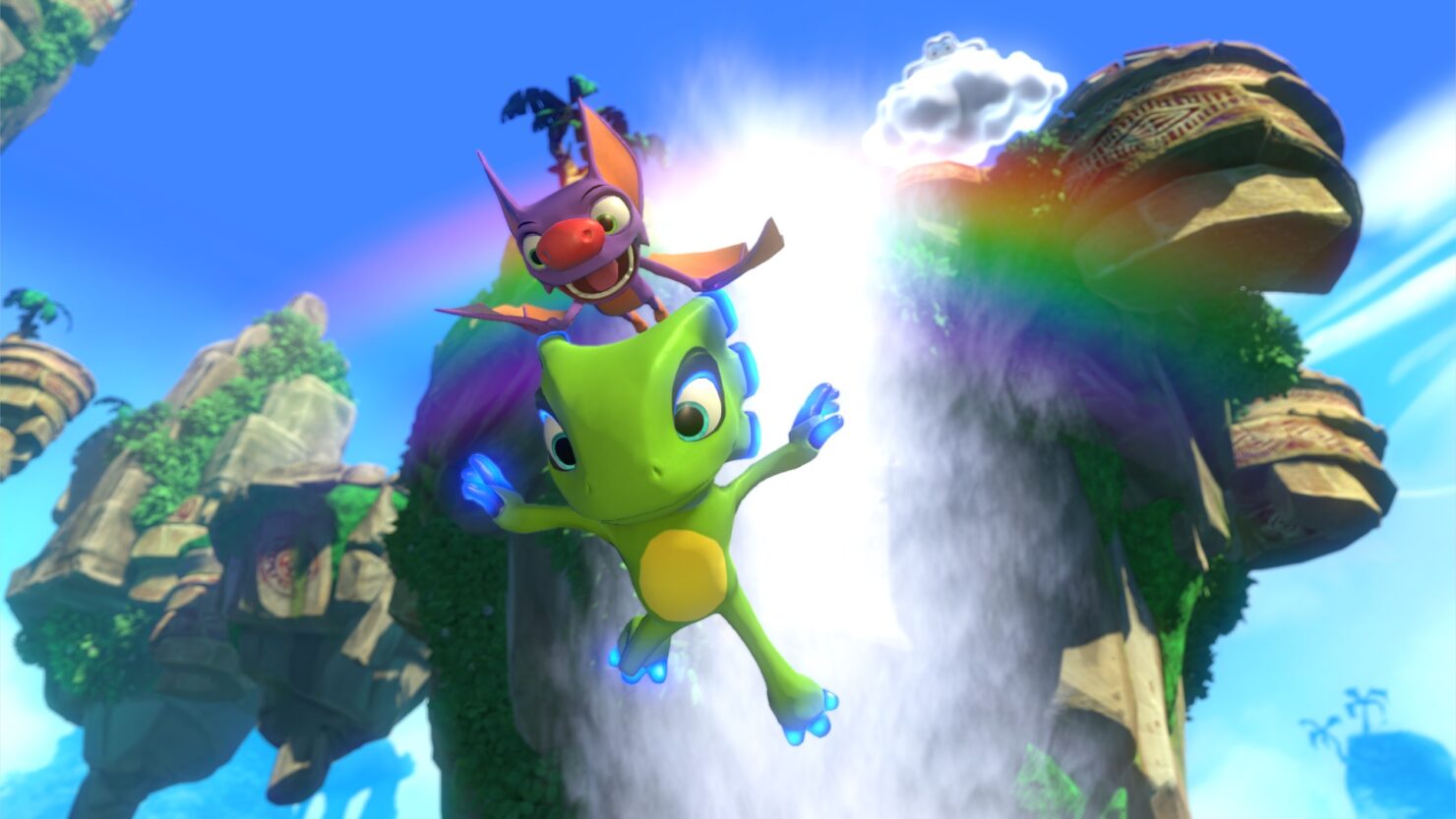 If you owned a Nintendo 64 back in the day, I’m sure you will have at least heard of Banjo-Kazooie. While fans may never see what became of Rare’s Banjo-Threeie, Yooka-Laylee is probably the closest thing we will ever get to that game. Created by a group of former Rare employees, Yooka-Laylee is the spiritual successor to Banjo-Kazooie.

I got a chance to speak with Steve Mayles, the Character Art Director at Playtonic. You may be familiar with some of Steve’s creations, including Banjo, Kazooie and even some of the modern Kong (as in Donkey Kong) family. Check out our interview to read the latest on the experience Playtonic had with Kickstarter, the inclusion of Shovel Knight in Yooka-Laylee and more.

I am Steve Mayles, the Character Art Director at Playtonic. Our game, which is releasing on April 11th, is called Yooka-Laylee. Yooka-Laylee is a free-roaming, open world, 3D platformer.

You gave your fans a chance to support Yooka-Laylee on Kickstarter back in 2015. Is there more pressure when developing your game when you know your fans have already paid for your creation?

I mean, we always set out to make the best product we can anyway, that’s what we’ve always done over the years, as developers. We are always conscious of treading a fine line because we built the game as a Banjo-Kazooie spiritual successor, so we wanted to make sure we included plenty of elements that made it feel like that because that is what people backed. We also wanted to say, ‘well, we aren’t staying in the past, it’s not a retro game as such’. We are introducing new things to the genre, things like the expandable worlds, getting the moves in any order and the power-up system involving the tonics.

Yacht Club Games managed to include Shovel Knight in this game. How did that come about and did you contact any other developers about including more characters like this one?

It’s quite easy to do when you have two small, independent companies. It was probably like a chance e-mail conversation or a chance meeting - it’s just as simple as that. “Oh yeah, we can have one of your characters in our game? Okay, let’s get Shovel Knight in there!”, it was as easy as that. There’s no hoops to jump through or any legalities or stuff like that. It’s great to see Shovel Knight in Yooka-Laylee.

Are there any other indie characters appearing in Yooka-Laylee?

It is a one off this time, but there’s no reason more can’t appear in more Playtonic games in the future.

Yooka-Laylee looks and feels like a game from an older generation (I mean that in a good way!). What do you believe you've done to make this genre seem fresh again?

I think the fact that we’ve got high-resolution graphics, that is the biggest thing for people when they see the game as being fresh. The last time these games were around was probably in the late 90s or the early 2000s. Obviously, the graphic fidelity wasn’t like this, and to a lot of younger players, it’ll be a completely new genre anyway. We’ve also got the other things I mentioned before, like the expandable worlds, because the worlds are so massive when they are fully expanded. We start with a half-sized world, and then you can use your Pagies to either expand the current world to make it twice as big, or you can move on to a new world. It’s a little bit more about player choice. You can also choose when to buy moves. If you want to go through the first two or three levels without a certain move because you haven’t collected enough notes, you can do that. It might be hard, but you do have the choice.

You've really gone back in time and have included local co-op multiplayer, a feature that has been dying over the past few years. Is this a feature fans requested or did you always plan to include it?

I think it was a Kickstarter tier. Team 17 have been really good in helping us pull together the local co-op. It’s stuff that we have fond memories of, before there was proper online multiplayer. You know, getting four people around a couch, because you get that comradery and all the jibes going and stuff. It’s just a lot of fun.

You gave your Kickstarter Backers the toy box demo to mess around in quite a while ago now. Was there any piece of feedback Playtonic received for this demo that stuck out to you?

There were some things we knew we would get feedback on, even though I was like “you’ve got to get this animation in there! People are going to say ‘oh my god, this game is crap because this animation isn’t there’.” We kind of knew that was going to happen so we were already implementing those changes. It was really useful because it reaffirms what you think when people say the controls are great, or if they aren’t quite sure about the controls, like with the swimming. There were some people that pointed out the swimming controls, so we changed that. Initially, we implemented the swimming like Banjo, and then we changed it so the sticks and the buttons work the other way around. It even took us a little bit of getting used to, but once you get used to it not being like Banjo, then the swimming system is a lot more flexible for this sort of game.

Out of the systems you are developing Yooka-Laylee for, the Nintendo Switch looks like the system you could experiment the most with. Have you tried utilizing any of the Switch's unique features (such as using the touch screen, for example) with your game?

I couldn’t possibly give any secrets like that away, I’m afraid!

Are there any plans for a PS4 Pro upgrade to the game?

I don’t believe we’ve spoken about that, no.

What were the biggest challenges in developing Yooka-Laylee?

I think you touched on it before, which is doing justice to the huge amount of faith that 80,000 backers had in us. They said, “we loved your previous games, we believe you can do it again, here’s the money, go off and do it”. That’s the biggest challenge.

I imagine that’s quite scary…

It is, but on a day to day basis when you are focused on doing your little job, and you know every other individual in the room is a talent professional doing their little job… I won’t say you hope it comes together, you know it will come together because we’ve done it before.

How would you convince a generation of people who never played classic 3D platformers to play Yooka-Laylee?

I think initially the visuals draw people in, even just the screenshots. You’ve got these colorful, fantastical worlds, you’ve got a whole new cast of crazy characters and I think that will intrigue people because it is a real gap. There hasn’t been this sort of game around for many years. As well as the old Dad saying, “Come on, Son, you’ve got to play this game! It’s just like the games I used to play when I was a lad!”. *laughs*

Yooka-Laylee will be available worldwide on April 11th for PC, PlayStation 4 and Xbox One. Playtonic said there will be a Switch port of the game coming at a later date, so stay tuned for coverage on that. Take a look at our preview of Yooka-Laylee to see what we thought of the game.