That day has finally come, the studio announced in a press release. Here's how it's all going to work (for instance, there won't be CrossBuy or character transfer options).

DCUO players on PC and PS now play together with cross play! When you log in today, you will seamlessly be playing with players on the opposite platform, including in groups, in leagues, in On Duty content, and in the open world. We hope you will enjoy the new faces you'll meet, and the freedom to play with virtually anyone or everyone else (in your region) who plays DCUO.

Q: What is cross play?
A: Cross play will allow all players on PC, PS3, and PS4 to play together as if they were on the same servers. In game, the transition will be essentially seamless. The biggest thing you will notice is more players around.

Q: Does cross play mean I can play my characters on PC and PS?
A: No. The accounts remain separate, and your characters remain attached to your PC or PS accounts.

Q: Do my purchases transfer to the other platform?
A: No. The accounts remain separate, and your characters remain attached to your PC or PS accounts.

Q: Can I transfer my characters from one platform to another?
A: No. We do not plan to offer character transfers of any kind, for business and technical reasons.

This will surely improve the users' experience, especially on PC where the player base was smaller. By the way, an Xbox One version of DC Universe Online has been recently announced, but for the usual reasons it will be kept completely separate with no CrossPlay.

There's also a content update with Episode 21, which premium members will be able to play today (while the others will have to wait for February 10). This episode has been apparently inspired by the new TV show Legends of Tomorrow. 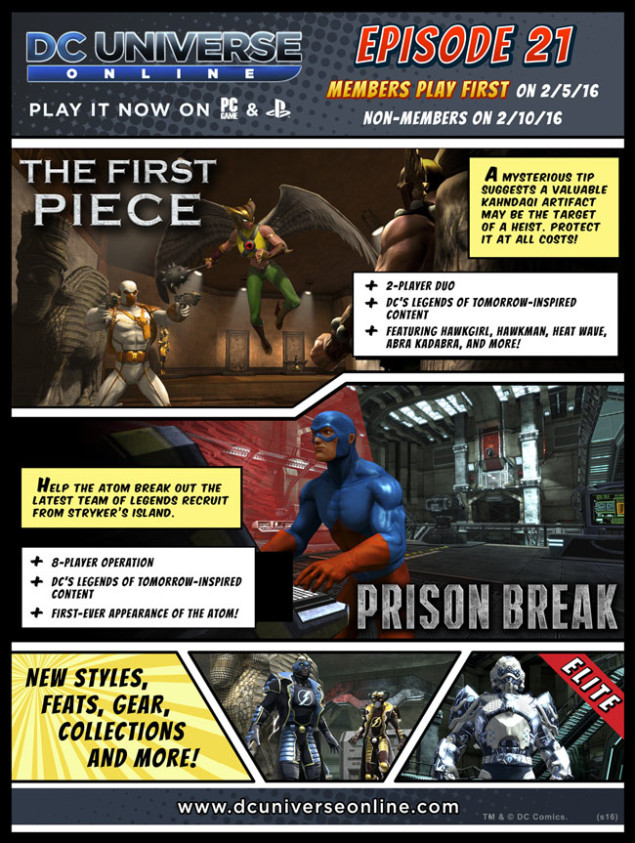 A mysterious figure has asked you to investigate a heist taking place in one of Gotham University’s Museum Warehouses. The target appears to be a valuable and potentially powerful Kahndaqi artifact. Partner with Hawkgirl or Heat Wave to retrieve the artifact and discover who’s behind the heist in the new Duo, The First Piece! Gain access to new feats, collections and gear! Free to access for Members!

• To play this 2-player Duo, your character must be level 30 and have a minimum Combat Rating of 142.
• Open your On Duty Menu and look for the new Duo under Tier 7 of the 2-Player Tab.

The same mysterious contact has asked you to work with the latest member of the team, the Atom! Who is this mysterious person and what are his motives? For now, he has asked his newly formed Team of Legends to break out a recently incarcerated individual from Stryker’s Island! There’s just one catch, he’s being held in maximum security inside the Penitentiary. Hatch a plan with the Atom and break him out from the inside...as inmates in the new Operation, Prison Break! Gain access to new feats, collections and gear! Free to access for Members!

• To play this 8-player Operation, your character must be level 30 and have a minimum Combat Rating of 142.
• Open your On Duty Menu and look for the new Operation under Tier 7 of the 8-Player Tab.