To say that Paradox Interactive (FRA:ETA) has stepped up their game in recent times would be an understatement, to say the least. Not only have the company expanded far beyond their original base, purchasing studios like Harebrained Schemes and Triumph Studios, they also acquired White Wolf Publishing and the Prison Architect IP. This expansion has also been backed up by a number of successful years, with 2018 proving to be the companies best ever.

The success of the year shouldn't come as a great surprise as we have followed Paradox quite closely. Q2 was a record quarter for the company, Q3 saw a large year on year increase in revenues and profits, with Q4 finishing the year as the very best quarter the company has ever had. Is it a surprise that Paradox Interactive, in their annual report, have shown a record year in 2018 and grown from having 269 employees at the end of 2017 to 405 at the end of 2018? No.

Why? The success of the company and its strategy over a number of years is one of the primary reasons. Two years ago we spoke about Paradox and their 'long tail' strategy towards a large portion of their titles. Essentially, the company and its development teams support their titles with new content over a large number of years, not just months. The drop off of game sales regularly seen with other titles isn't the case with Paradox Interactive, the company often seeing a large uptake much later in the cycle. Often the cause of this is also the use of free-weekends and game sales, bringing people into a title who otherwise may not have tried it.

Ebba Ljungerud, CEO of Paradox Interactive had this to say:

Our business model is built to continually deliver new games, while we continue to grow and support our existing active titles. This combination lowers risk and guarantees a stable revenue stream over time. This also allows for patience – we release games when they are ready, and we prioritize good products that will be appreciated by our fans over short-term smooth growth curves.

Working with this long tail strategy is the style of game the company actually works on. Where others may chase trends, Paradox has remained true to the niche that brought them success, while slowly expanding into areas featuring less competition. This slow expansion of their portfolio and studios, which can be seen over a decade and not merely a year or two, has resulted in titles like Magicka, showing a sound investment in an independent developer. Tyranny, highlighting a smart expansion into the RPG genre. Cities: Skylines, taking advantage of the failed launch of SimCity by Electronic Arts.

More to Come - Looking Down the Line

Looking further afield, the company also recently announced what will be, I'm making a prediction that I'm willing to stake myself on, the company's best-selling title ever when it's launched. Vampire: The Masquerade - Bloodlines 2 was officially announced during the Games Developer Conference (GDC) to huge anticipation, being the long-awaited successor to the cult classic.

Through the year we also made several acquisitions – all with the goal of building our development capacity, and to equip us for more and larger releases in the future. Through these acquisitions, we strengthen the company’s brand portfolio and broaden our skills and know-how around developing different types of gaming experiences.

Ebba Ljungerud had to say, also going on to state

In the coming year, we will continue to diversify onto different platforms and into new genres. Many of our games in development will help us grow our presence in the management and RPG genres, while others will strengthen our position in our core segment of strategy games. We see an increasing interest for our games on consoles and we will continue to develop both new and existing titles for platforms like Xbox One, Playstation 4 and Nintendo Switch. Additionally, we are translating our games into more languages, and growing our efforts with local marketing on fast-growing markets, for example in Asia. 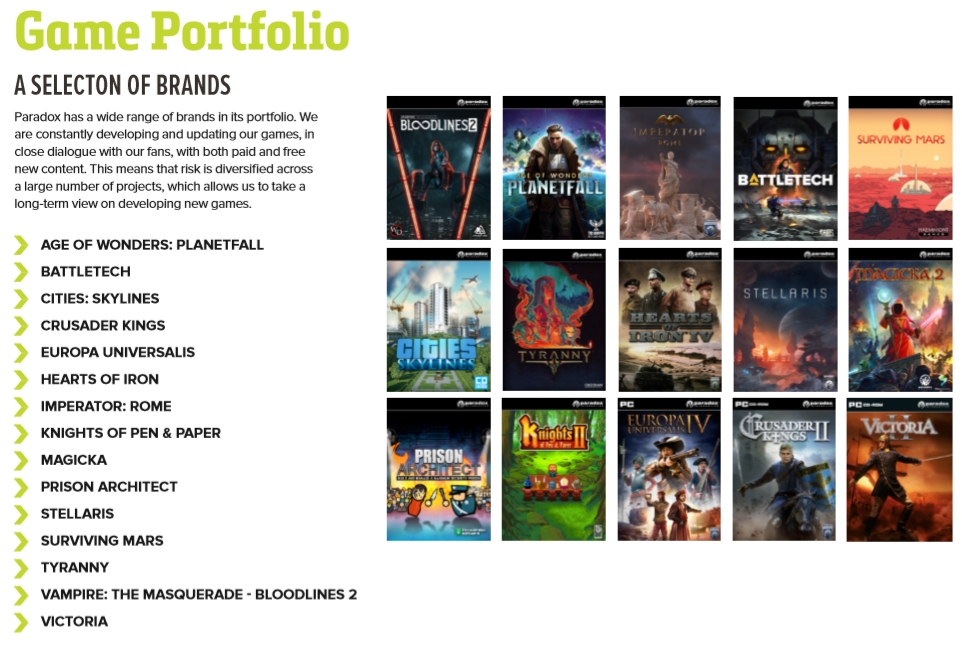 Much closer than that, the company has two full titles announced for release in 2019. Imperator: Rome and Age of Wonders: Planetfall. In addition, the current year will see the release of further expansions for current titles, with sales bringing new players to legacy titles.

All things considered, the follow up to the best year ever for Paradox Interactive looks to be yet another strong year, with the companies most anticipated game ever currently in development for release likely during 2020.