Back in January, a new rumor regarding a Wii U exclusive title releasing before the end of 2016 that had yet to be announced started circulating online. The rumor stated that a new entry of the Paper Mario series was in development by Intelligent Systems, and it looks like the rumor was indeed right, as this game has finally been revealed. 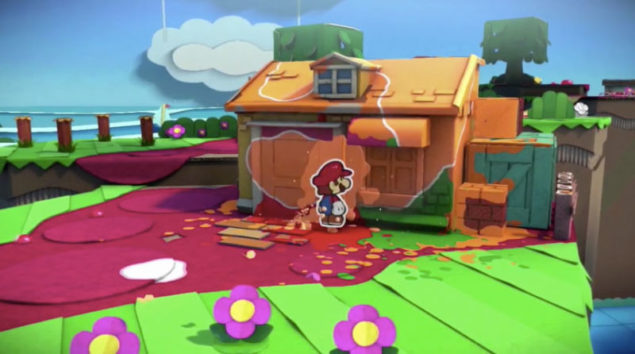 The new entry of the Paper Mario series will be called Paper Mario Color Splash. In the game, players will control Paper Mario as he tries to restore color to Prism Island, a concept that doesn't seem to be all that different from the Epic Mickey series. Not much else is currently known about the game, but it seems like there's some sort of card based combat, judging by the announcement trailer, which can be found at the 12:30 mark of the video below.

The latest Nintendo Direct has also revealed additional details on other Wii U titles that will be released later this year in all regions. The role playing game combining the Shin Megami Tensei and Fire Emblem series, known in Japan as Genei Ibun Roku #FE, will be released in North America and Europe as Tokyo Mirage Sessions #FE on June 24th. The game will feature only the Japanese language dub.

A new trailer for Star Fox Zero has also been shown during yesterday's direct. In a surprise announcement, it's also been confirmed that Shigeru Miyamoto's Project Guard will be released alongside Star Fox Zero on April 21st as Star Fox Guard.

Yesterday's Nintendo Direct has also confirmed that Super Mario Maker and Splatoon will be receiving new updates soon. The Super Mario Maker update, which will be released for free in all regions on March 9th, will add new objects to the level editor, such as keys and locked doors, new mystery mushroom costumes, a new Super Expert Mode for the 100 Mario Challenge and more. The new Splatoon update, which will be released on Mach 8th, will include matchmaking and balance tweaks and Splatfest updates. Another two-part update introducing new weapon sets and more will be released in the future, with the first part launching next month.

Yesterday's Nintendo Direct also covered upcoming 3DS games such as the controversial Metroid Prime Generation Force, Dragon Quest VII, Bravely Second, Fire Emblem Fates Revelations and DLC packs, a new platform game starring Kirby called Kirby: Planet Robobot, a new amiibo line and more. The latest entry of the Rhythm Heaven series, called Rhythm Heaven Megamix, has also been confirmed for the West with a generic 2016 release date. Monster Hunter X has also been confirmed for the West as Monster Hunter Generations, and it will be released sometime this Summer in both North America and Europe.

Star Fox Zero To Release On July 15th And Not During April, According To French Retailer