OS X 10.11 El Capitan is due for release on the 30th of September, and already, Apple is working on its next point update, OS X 10.11.1 El Capitan, which saw its first ever beta hit developer channels only four days back. The said beta was only available for registered, paying developers, but all of that changes today as Apple has flicked the switch and has made OS X 10.11.1 El Capitan available for public beta testers as well.

As ever, the new beta is available through the company's Beta Software Program website, and is absolutely free if you want to take it for a spin on your Mac. Simply head over to beta.apple.com from your Mac's Web browser, and sign up for the program. Once you're done, click on the 'Enroll Your Devices' button at the top, and select 'OS X' from the next page. You'll then be required to back up your Mac, so that you don't lose any data during installation. Next, you'll be required to click the blue 'Download the OS X El Capitan Public Beta' button, after which you'll be taken to the Mac App Store for download.

All of the subsequent updates for OS X 10.11.1 El Capitan will be pushed to your right from the Mac App Store, so you don't have to install the darn thing all over from scratch. Nice and easy. 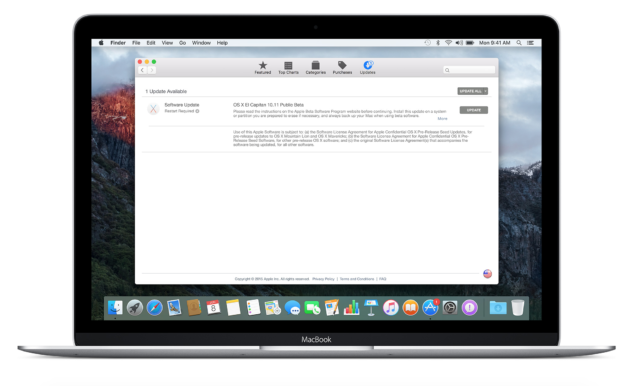 It's likely that Apple will keep OS X 10.11.1 El Capitan in the beta phase for a while. After all, the OS X 10.11 update is due for release on the 30th, and it would be somewhat odd from Apple's end to push out a point update of its desktop operating system so soon.

Lastly, we highly recommend that you install beta software on devices that are not your daily drivers. The reason for that is quite simple: beta software tends to be very unstable at times, and they can be very rough around corners where we least expect them to be. So keep that in mind before you go ahead and install OS X 10.11.1 El Capitan on your Mac.

Currently, OS X 10.11 El Capitan is in its GM phase, and it's highly likely that the build which Apple has pushed out to developers through its Apple Developer Program will be the one that would turn out to be the final release.

Will you install OS X 10.11.1 El Capitan beta on your Mac? Do let us know, in the comments section below.