Fingerprint sensors have started to become more of a norm in the smartphone world. Following the iPhone 5S, more and more manufacturers have started, with Samsung and HTC having joined the pack as well through the Galaxy S6 Duo and the One M9 Plus launches this year. Looks like the buck doesn't stop here as we have one more manufacturer that will be introducing biometric recognition on their device. Oppo's R7 has been making quite a lot of rounds these days, courtesy of a bezelless display on the device. But that won't be the only Oppo will be showcasing on the 20th of this month. We'll also be getting to see a R7 Plus that will have some features the R7 doesn't. 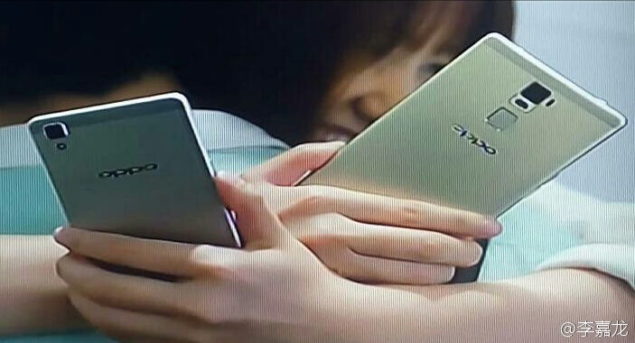 While the R7 has made several rounds on the internet, courtesy of a unique bezelless display that allows the device to display content edge to edge, allowing for a much better viewing experience, its counterpart, the Oppo R7 Plus hasn't seen that much attention. Well, that's set to change today it seems, as an advertisement's been making rounds over at China. The commercial seems to have been aired earlier than expected and we get to take a look at both of Oppo's devices in it.

Looks like the R7's elder sibling, the R7 Plus will be the one getting the bezelless display, if the above information is correct. Not only will the R7 Plus be featuring a bezelles screen, but it'll also have a larger screen size coupled with a fingerprint sensor on the rear. Sounds pretty great if you ask us. Manufacturers from China are on the rise and new features are always welcomed on devices. We'll just have to wait until the R7 duo's unveiling this month to learn more. Stay tuned and let us know what you think in the comments section.