Oppo's Find 7 and Fin 7a are one of the most well famed smartphones and as for the cherry on top, the company previewed its upcoming ColorOS. ColorOS version 2.1.0i is an Android 5.0 Lollipop based update which will be rolled out soon. Yet, it currently resides in the developing phase and would be available sometime in the future. Though the complete update will be reserved for later, the beta version will arrive sooner.

Oppo stated that ColorOS is yet in the testing phase but the Lollipop based update will arrive 'by the end of this week'. The ColorOS v2.1.0i was first posted on Oppo's official forum so developers could take a look at its features and overall user interface. Youtube has also been a medium used, as Oppo showcased the ColoOS in a short video clip on Friday. Lets take a better look in to the details.

Since the official Lollipop update by Google was announced more than six months ago, Oppo has been real slow at adopting the new operating system. The updates that arrived were either beta versions or could not be downloaded via OTA (over the air) mechanism. But as can be seen, the Lollipop based ColorOS is at the verge to be handed over to the users as an official update. 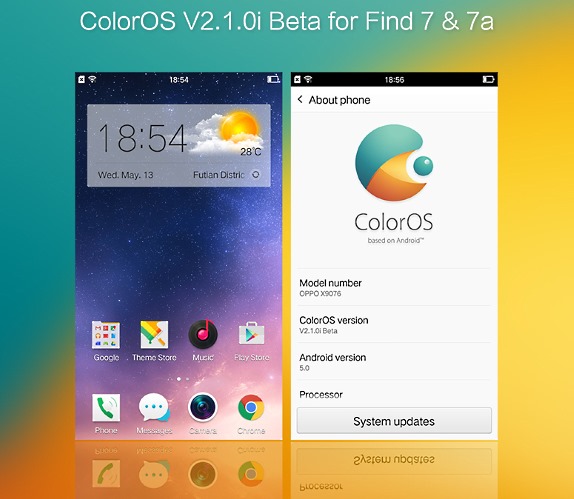 Considering the teaser video, we can see that Oppo has emphasized on three major aspects of the update. It now features a new flat user interface that resembles or is the Material Design that Oppo seeks to provide. There is improvement in feature build up which are advanced than the previous gen KitKat based ColoOS with a version of 2.0.8i. Considering the fact that this will not be the final version of the OS, Oppo is deemed not to launch it via OTA on which Ricky, Oppo's Product Manager stated on the forum:

Another good news is through the hard work of our engineers, you won’t need to format your phone completely like the Chinese update, you’ll still be able to use full wipe package to update. However it’s a pity that this version will not be available over OTA.

Other changes in UI element remain the same and have not as much of a big difference than the KitKat version of ColorOS. However, Oppo did add the 'Easter Egg' game that fans want. However, the Lollipop based KitKat will arrive by the end of this according to Oppo, so to all fans out there, buckle up for the update. As for now, let us now in the comments what other changes do you want to see in the ColorOS v2.1.0i?