OnePlus fans all around are in for quite a bit of waiting until the company launches its second flagship, the OnePlus 2 on the 27th of this month. For a company that started barely two years back, OnePlus has managed to gain quite a lot of popularity, and the company seems eager to build on its loyal fan base this year around as well. The OnePlus 2 will be the first device to be launched in virtual reality, which will allow those 'attending' a host of different ways to interact with the device. The company also promised its own versions of Google's Cardboard, free of cost for those attending the event, and if you're looking to get one, you're in luck. 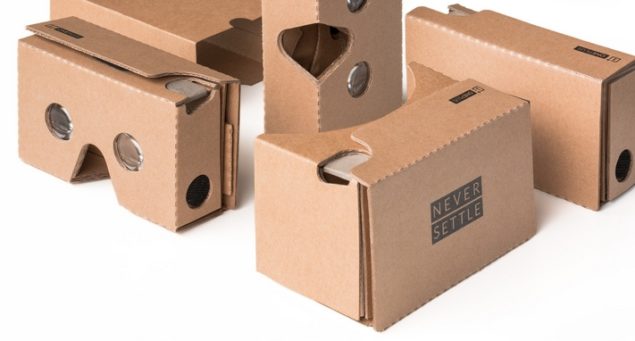 OnePlus One Cardboard For Launch Event Is Now Available For Order

After its promise that it would be providing users all around with a free, modified Google Cardboard for the OnePlus 2's VR launch this month, the company has made true on its promise today. You can now order the device through OnePlus' website, free of cost. Of course, shipping costs will apply, but the device itself will cost you $0. As far as the changes OnePlus has made to its device, there are several to go ground.

For starters, its smaller than other Cardboard headsets that you'll see around. Its also built out of better Cardboard, for increased durability, with Velcro added to the mix, so you should be quite safe from any unintended damage. The company also says that it's added a special oil coating on the headset, which should protect it from any grease or dirt that should come its way. The OnePlus 2 is looking to be quite a reasonable device so far, with its future perhaps hanging on the manufacturer's ability to contain the Snadpragon 810's famous throttling issues. Stay tuned and let us know what you think in the comments section below.