A new press image leak of the OnePlus 5T pretty much confirms that the Chinese manufacturer is shifting away from a generic phone design and coming up with something slightly new, if not completely different.

OnePlus 5T Shows Reduced Bezels but Could Sport the Same Footprint as the 5.5-inch OnePlus 5

Coming from Slashleaks, the Gold version of the OnePlus 5T has been leaked, revealing the same metal jacket that surrounded the flagship earlier released this year. Now that we might get to see an 18:9 aspect ratio, the OnePlus 5T is rumored to get a resolution measuring at 2,160 x 1,080, meaning that we will get to experience an FHD+ panel on the smartphone for the first time.

The bezel-less design will also mean that the front-mounted home button plus fingerprint scanner is not going to be present, meaning the new location is obviously going to be at the rear end of the smartphone.

As for the hardware, we can forget about wireless charging since that will drive up the price of the phone and water-resistance is also going to be out of the question. However, we can expect the same hardware that made the OnePlus 5 so snappy and we’re also expecting the phone to be offered in the 6GB and 8GB RAM configurations. 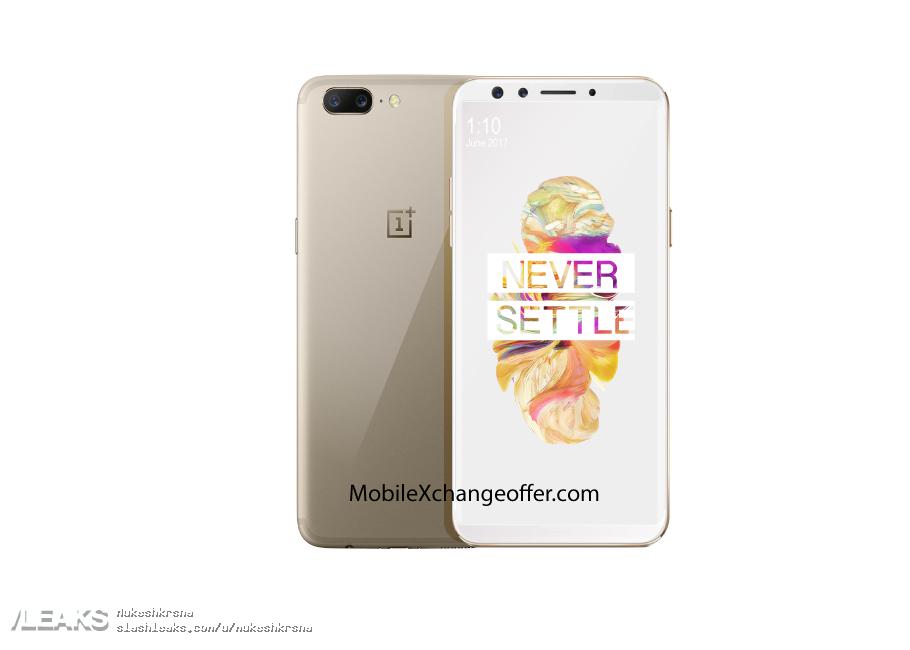 Looking at last year’s approach, the release of the OnePlus 3T meant a bigger battery so hopefully, we’ll see this positive change in this year’s OnePlus 5T assuming that it actually does get announced during the month of November. As for the display size, it is rumored to go up to 6 inches, giving users access to more screen real estate while maintaining the same overall dimensions of the OnePlus 5.

We expect the dual-camera feature and specs to be retained, offering you the same optical zoom upgrade present in the OnePlus 5. However, what we’re not sure of is the price tag. With a design change up like this, you can definitely expect OnePlus 5T to be stamped with a higher price but we’ll make all of that information readily available if and when the phone is announced possibly next month.