Nvidia Working On Next Generation Virtual Reality Device; The Near Eye Light Field Stereoscope, Aims To Bring It To The Market by 2018

We have been hearing for quite some time that Nvidia has been working quietly on a new generation of Virtual Reality solutions and according to Fudzilla, this initiative is in collaboration with Stanford University. The new technology, called NE-LF (Near Eye Light Field) VR proposes to completely eliminate motion sickness by offering 4D (2D + 2D) images for both eyes that will combine to form 1 3D image (as opposed to two 2D images for both eyes that combine to form 1 3D image). According to the report, the tech will arrive by 2018. 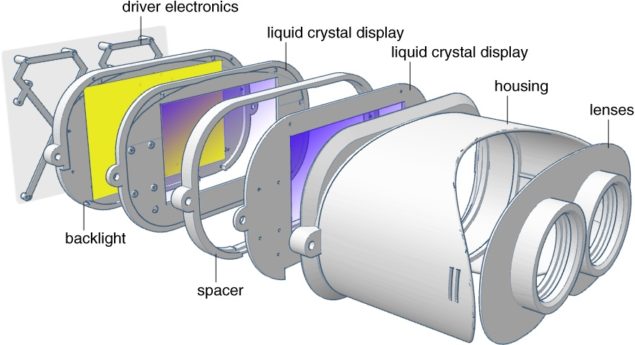 A blueprint of the NE-LFD Virtual Reality HMD from Nvidia. @Nvidia Public Domain

Currently, all VR solutions on the market have some form of motion sickness when viewing objects that are close to the virtual camera. According to David Luebke senior director of research at Nvidia: “This is because of the vergence-accommodation conflict, which is how much the lens of your eye has to change to bring sharp focus to your retina.” This means that if for eg, you are viewing something as close as your hands - it will inevitably lead to motion sickness. The new technology, called the near eye light field stereoscope, will address the vergence-accommodation conflict and result in a completely natural and more flexible experience.

Gordon Wetzstein said that:  “It provides a much richer and more natural visual experience than conventional head mounted displays and has the potential to reduce nausea, eyestrain, and also increase visual comfort.”

The tech uses two layers of LCD separated by around 5 millimeters and sends each eye an entire "4D" light field of images so the eye can naturally set focus between objects. This will eliminate the forced focus effect and the nausea that comes with it - making everything more natural. You can look even closer than your hands without experiencing any adverse effects. The resolution of the screen is 1280x800 currently, and since we are stacking screens the resolution for both combined LCD panels remains the same.

Unfortunately however, the HMD will work by splitting the screen into two halves, making the effective resolution fall down to 640X800 per eye - which is way too low for any modern setting. The good news is, that this is just a prototype and the resolution of the LCD panel depends entirely on the manufacturer and has absolutely nothing to do with the technology (you want higher resolution, simply use a high res panel). This is quite obviously, promising tech - but whether it will actually end up in the mainstream market remains to be seen.

All major companies have been pushing forward with VR and the conventional VR tech has already gained alot of momentum. It would be very hard for Nvidia to come up with a completely new standard and knock the competition out of the water. It is also possible that by 2018, conventional VR makers have solved the problems that result in motion sickness completely. It is also worth mentioning that Nvidia has also finished work on VR Direct - a rival solution to AMD's Liquid VR.