Remember how some sites claimed that Project Denver is pretty much dead? And how we kept on posting news about it regardless? Well, guess again, because Nvidia has just scheduled an event under the banner of "NVIDIA’s Denver Processor". So unless they have scheduled an entire event just to say that the project is canceled, this here is the official reveal of Nvidia's homegrown "super dual core". 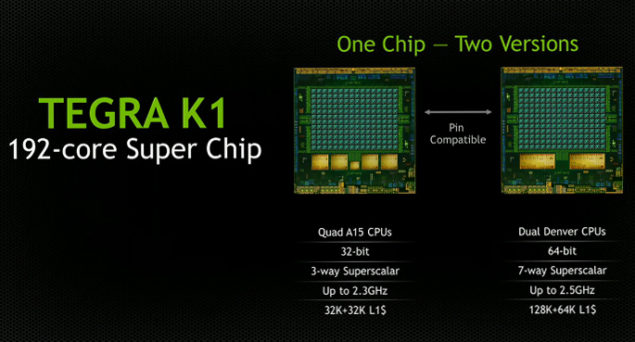 Project Denver is basically Nvidia's attempt at creating a home grown processor based on the highly efficient 64bit ARM v8 architecture. Now I can say with 99% certainty that the processor will make its debut in the second variant of the Tegra K1 SoC. Also I can see a Tegra K1 lecture listed immediately before the Denver event, so there's that. Theoretically, Project Denver's dual core should be much more powerful than the previous 4+1 Cortex A15 based variant.  The 'Super Dual Core' as Nvidia calls it is a highly efficient architecture (ARMv8 -A) and the first iteration of ARM to feature 64 bit. A major indicator of its power efficiency is that while the 4+1 Variant features a low power core for non-intensive applications, the Denver Variant only has the 2 cores.Here is the event in question and the hosts of the show:

Now all this is happening at Hot Chip; which is a technological symposium held every year in August, co-sponsored by IEEE and ACM SIGARCH. The full schedule shows many known companies including AMD having booked timed events. Now there have been rumors that the upcoming Nexus 9 Tablet will feature the Tegra K1 Denver Variant. The timing is quite convenient so I am personally sitting firmly in the "happening" camp. The Nexus 9 is supposed to have a massive 2560x1440 screen resolution and 4GB of RAM (which is 1GB more than any other android device on the market right now). Seeing that the Tegra K1 would be an absolute power house when it comes to graphics (especially counting the Android Extension Pack) coupling it with Denver ARMv8 cores would result in an absolutely killer deal.

One of the major problems that the Tegra 4i faced was the fact that it supported an A9 chip, which was mediocre at best. In the mobile market, GPU horsepower is not really of significant importance except to a small minority and the overall package will get more design wins any time of the day. If the Nexus rumor is true then this could be Green's only chance to penetrate the smartphone sector. One thing is sure, the Tegra K1 Denver 64 Bit SoC will make or break Nvidia's future in the smartphone Industry.

Apparently #Nvidia now does events on dead projects </sarcasm> because a Project Denver event has been scheduled. http://t.co/QarMutMk3y