Something amazing has happened today. Nvidia has unveiled its brand new GameWorks API for the world to see. The press deck provided us to contains only the preview of the "ultra" low level API but Nvidia is expected to demo it for the world to see on GTC 2016. Nvidia has recently pushed its GameWorks SDK and libraries into the public domain and all of this now seems to have been building up to this revelation. 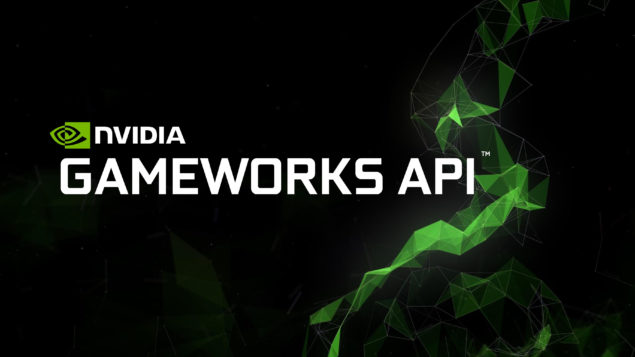 While not much is known about this API (or even what the term "ultra" low level means for that matter) Nvidia has provided us with a few juicy details in the press deck. Nvidia has recently embraced the open source movement and this will be the figurative jewel in the crown. The ultra low level API in question will be completely open source and the source code is expected to hit GitHub by Q4 2016. The company is currently in the process of getting ready for the developer preview phase that will in all probability launch after the GTC 2016 event. 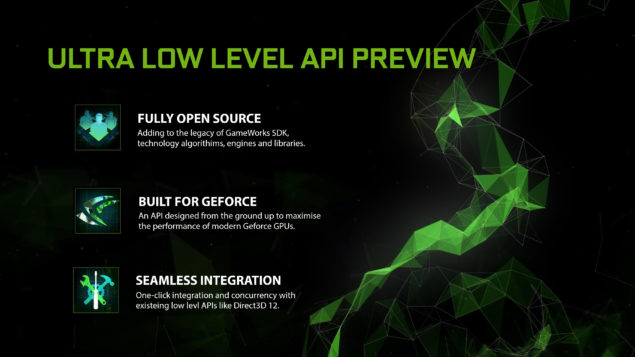 One of the most interesting things about the GameWorks API is that according to the documentation, it offers "seamless integration" with DirectX12. What Nvidia has created is probably the first fully concurrent low level API. From what we can gather, the API will be able to operate on an "ultra" low level concurrently (and under) DirectX12. According to Nvidia, the company has managed to do this with no visible API overhead (which is probably where the term "ultra" low level stems from). Even though the API will be open source, it has been designed from the ground up to fully power Geforce series of GPUs - which means that it is unlikely we will ever see a Radeon implementation of the same.

The entire point of shifting away from bulky drivers and to more to-the-metal APIs was to increase explicit control over the resources of the GPUs. At any given time, there are certain resources in the GPU which are idling and not in use. Explicit control over the GPU would allow developers to make use of these "idle" resources, increasing performance by leaps and bounds. Nvidia's GameWorks API builds upon this philosophy with quite a few innovations of its own: 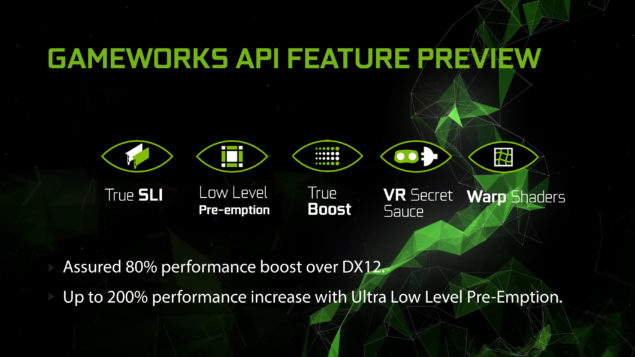 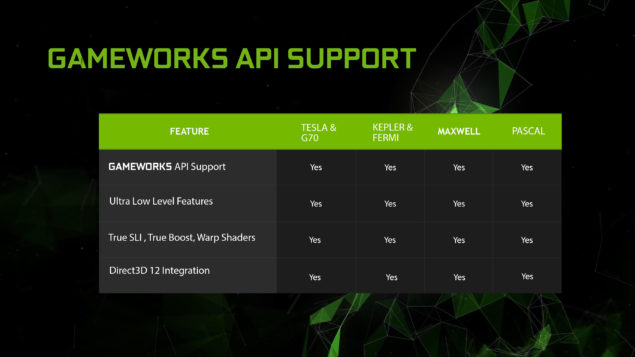 At the end of the press deck, Nvidia also gave us a very interesting break down of architectural support. The company has achieved something miraculous. Nvidia has promised a performance boost of 80%-200% with just a software update! We can also see that GameWorks API is broken down into 4 major components. The API itself, low level feature set, True features and Direct3D 12 integration. The new "ultra" low level GameWorks API is supported all the way from the G70 architecture to the upcoming Pascal architecture. The API is even able to almost magically simulate Direct3D 12 on very old architectures such as as the Tesla and G70.  We can't wait to hear more about this at the upcoming demo on GTC 2016 (on 4th April).

10 Of The Better April Fools – In No Particular Order