The official specifications sheet of NVIDIA Tegra 4 Wayne have been leaked by Chiphell forums. Earlier, we reported that NVIDIA was planning to launch its NVIDIA Tegra 4 based 'Wayne' and 'Grey' chips next month at CES 2013. 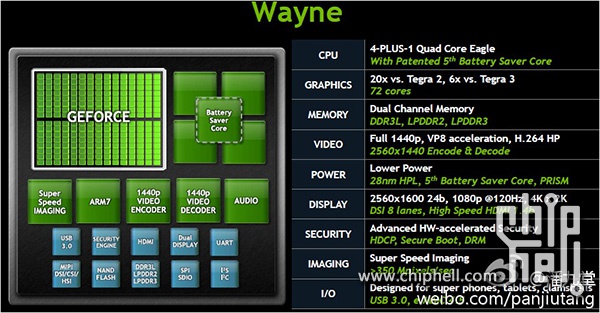 Wayne being the highest performing 28nm Multi-Core Application processor features a 4+1 core design. Its primary Quad Core are powered by the ARM Cortex A15 while a single core presumably 'Cortex A7' would be dedicated as a battery saver core. The GPU part on next-generation NVIDIA Tegra 4 Wayne chip consists of 72 cores which is upto 20 times as much powerful as Tegra 2 and 6 times faster than Tegra 3.

The NVIDIA Tegra 4 Wayne and 'Grey' chips are said to debut in second quarter of 2013 with showcase at CES event. You can learn more here.