Something very interesting cropped up. Something that could change the GPU landscape very quickly and very drastically. If the heading hasn't tipped you off, the thing is this: Nvidia's Maxwell GPUs give more profitable hashrates than their AMD counterparts.

Maxwell is perfectly poised to Steal AMD's Mining Buzz - Has hell frozen over?

Ok I have a confession to make. I have speculated on the mining tables tilting in Nvidia's favor before, but those usually involved Disruptive Business Changes such as CUDACoins. I never actually thought Nvidia would be able to faceoff AMD in a pure khash per watt and even khash per price basis. Well, hell apparently has frozen over because the Maxwell GTX 750 Ti has the honor of being the first card to actually be able to do that.

These benchmarks have been taken from TomsHardware :

The 750 Ti scores as massive win in Bitcoin mining but i am going to ignore that since BTC is now irrelevant to the GPU-minning scene. For starters, the GTX 750 Ti reference edition costs $139. It easily beats the R7 260X which is priced at $119 and gives 206 khash/s as compared to the 245khash/s of the GTX 750 Ti. Ofcourse another very important factor is that the GTX 750 Ti consumes only 60W of power compared to the 130 Watts of its Red Counterpart, so the initial bump of $20 is more or less justified. The other card in the immediate spectrum is the R7 265 which beats the Maxwell 750 Ti by a small margin (252 khash/s) however do remember that this is a $150 GPU with 150 Watt TDP.

Not only that, but a simple overclock done by Forbes shows that you can take the card up to almost 300 khash/s without the need for a power connector. If that isn't crazy, I do not know what is. 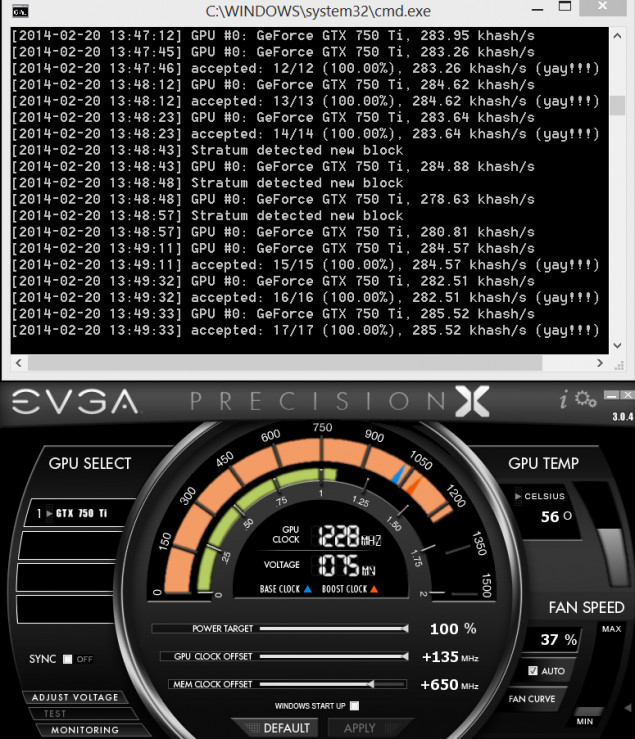 If the scaling holds up to the high end then there can only be one answer. High End Maxwell GTX Geforce GPUs will give higher hash rates than their Radeon Counterparts while consuming less power and staying cooler (the 750 ti in question here never crossed 60c with or without OC). The logical next question: Is Nvidia GPUs going to inflate like a balloon from hell? No. If what Forbes said is to be believed then Nvidia will not allow the GPU prices to be inflated. I am a bit skeptical about that since i am not exactly sure how they are going to manage that, but lets see. 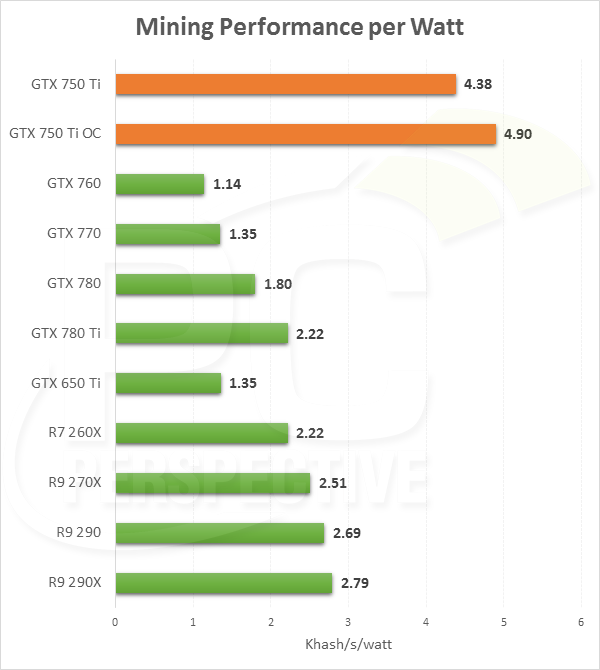