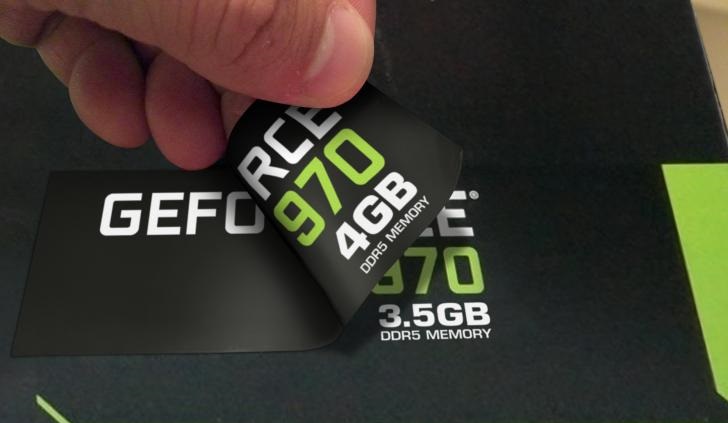 Nvidia has settled what is probably one of the most controversial class action lawsuits in the recent history of PC Hardware. The company came under fire for falsely advertising the Geforce GTX 970 as having 4 GB of vRAM - when in fact it had only 3.5 GB on the primary pipeline (that could be used effectively). The company has promised to pay out a pre-set figure to every GTX 970 owner as well as cover the attorney fees of the class action which are approximately 1.3 Million USD.

An image created in response to the GTX 970 controversy by our reader, Geno

The GTX 970 is probably the most popular, modern graphics card, out there right now. It has the highest share on the latest Steam Survey (June 2016) clocking in at around 5.05% of all users who partook in the survey. That coupled with the fact that if reports from JPR are anything to go by, the company has sold well over a million units of the GTX 970 (the exact figure remains unknown) and you are looking at liability almost certainly in several millions of dollars (plus $1.3 Million in Attorney Fees). Nvidia has to pay every GTX 970 owner $30 in compensation although the exact process for claiming the compensation has not been revealed yet. It is also not clear at this point as to how (and even if) buyers elsewhere in the world will be compensated.

Its worth noting that it was decided that there will be no limit to the amount of 970s the company compensates and will effectively have unlimited liability virtually encompassing all the 970 sales.

“The settlement is fair and reasonable and falls within the range of possible approval,” attorneys for the proposed Class said in the filing. “It is the product of extended arms-length negotiations between experienced attorneys familiar with the legal and factual issues of this case and all settlement class members are treated fairly under the terms of the settlement.”

Nvidia graphics cards cost approximately $350 and the anticipated $30 payout was calculated to represent a portion of the cost of the storage and performance capabilities the consumers thought they were obtaining in the purchase of the product, according to the proposed settlement. via TopClassActions

The chip in question (the GM204-200) had only 3.5 GB of vRAM connected to the main crossbar. Not to mention the L2 cache was also slightly less than advertised - 1.75 MB instead of 2 MB. It also only had 56 ROPs even though the documentation had stated it should have 64. All of these things combined made for an open and shut case of false advertisement.

The settlement assumes that a fair price for the GTX 970 (if it had been publicized with 3.5GB of vRAM) would have been $320. Nvidia could have avoided the entire mess by communicating to its customers of the correct specifications (a miscommunication between the engineering and marketing department that has cost them heavily). In any case, the GTX 970 debacle can finally be laid to rest and after everything is said and done - it is a decent card - and VR Ready I might add.

The Nvidia Graphics Card False Advertising Class Action Lawsuit is In re: Nvidia GTX 970 Graphics Chip Litigation, Case No. 4:15-cv-00760, in the U.S. District Court for the Northern District of California.