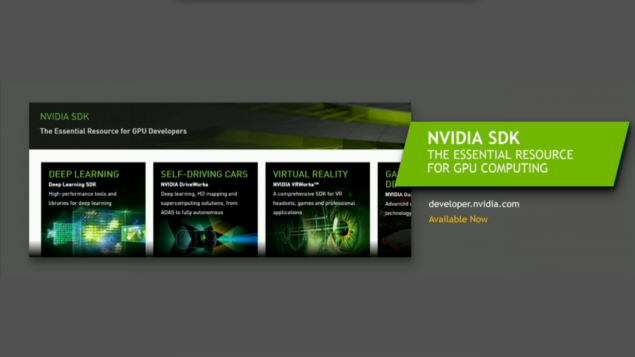 During their GTC 2016 keynote, NVIDIA talked about a lot of things. From their new Tesla P100 GPU to the Drive PX2, we have covered their new hardware - but NVIDIA also talked about major advancements in software.

More specifically, the NVIDIA SDK was significantly expanded. According to the "Green" company, the NVIDIA SDK will take advantage of the new Pascal architecture and makes it easier for developers to create great solutions on any platform.

The CUDA toolkit has been downloaded by over a million developers, apparently, and there are more than 400 GPU accelerated applications that benefit from NVIDIA's software libraries in addition to "hundreds" of game titles.

The NVIDIA SDK will be focused on seven areas, detailed as follows by NVIDIA:

What’s new — cuDNN 5, our GPU-accelerated library of primitives for deep neural networks, now includes Pascal GPU support; acceleration of recurrent neural networks, which are used for video and other sequential data; and additional enhancements used in medical, oil & gas and other industries.
Why it matters — Deep learning developers rely on cuDNN’s optimized routines so they can focus on designing and training neural network models, rather than low-level performance tuning. cuDNN accelerates leading deep learning frameworks like Google TensorFlow, UC Berkeley’s Caffe, University of Montreal’s Theano and NYU’s Torch. These, in turn, power deep learning solutions used by Amazon, Facebook, Google and others.

What’s new — CUDA 8, the latest version of our parallel computing platform, gives developers direct access to powerful new Pascal features such as unified memory and NVLink. Also included in this release is a new graph analytics library — nvGRAPH — which can be used for robotic path planning, cyber security and logistics analysis, expanding the application of GPU acceleration in the realm of big data analytics. One new feature developers will appreciate is critical path analysis, which automatically identifies latent bottlenecks in code for CPUs and GPUs. And for visualizing volume and surface datasets, NVIDIA IndeX 1.4 is now available as a plug-in for Kitware ParaView, bringing interactive visualization of large volumes with high-quality rendering to ParaView users.
Why it matters — CUDA has been called “the backbone of GPU computing.” We’ve sold millions of CUDA-enabled GPUs to date. As a result, many of the most important scientific applications are based on CUDA, and CUDA has played a role in major discoveries, such as understanding how HIV protects its genetic materials using a protein shell, and unraveling the mysteries of the human genome by discovering 3D loops and other genetic folding patterns.

What’s new — At GTC, we’ve brought NVIDIA Iray — our photorealistic rendering solution — to the world of VR with the introduction of new cameras within Iray that let users create VR panoramas and view their creations with unprecedented accuracy in virtual reality (see “NVIDIA Brings Interactive Photorealism to VR with Iray”). We also announced Adobe’s support of NVIDIA’s Materials Definition Language, bringing the possibility of physically based materials to a wide range of creative professionals.
Why it matters — NVIDIA Iray is used in a wide array of industries to give designers the ability to create photorealistic models of their work quickly and to speed their products to market. We’ve licensed it to leading software manufacturers such as Dassault Systèmes and Siemens PLM. Iray is also available from NVIDIA as a plug-in for popular software like Autodesk 3ds Max and Maya.

What’s new — We’re bringing deep learning capabilities to devices that will interact with — and learn from — the environment around them. Our cuDNN version 5, noted above, improves deep learning inference performance for common deep neural networks, allowing embedded devices to make decisions faster and work with higher resolution sensors. NVIDIA GPU Inference Engine (GIE) is a high-performance neural network inference solution for application deployment. Developers can use GIE to generate optimized implementations of trained neural network models that deliver the fastest inference performance on NVIDIA GPUs.
Why it matters — Robots, drones, submersibles and other intelligent devices require autonomous capabilities. The Jetpack SDK — which powers the Jetson TX1 Developer Kit — includes libraries and APIs for advanced computer vision and deep learning, enabling developers to build extraordinarily capable autonomous machines that can see, understand and even interact with their environments.

What’s new — We recently announced three new technologies for NVIDIA GameWorks, our combination of development tools, sample code and advanced libraries for real-time graphics and simulation for games. They include Volumetric Lighting, Voxel-based Ambient Occlusion and Hybrid Frustum Traced Shadows.
Why it matters — Developers are already using these new libraries for AAA game titles like Fallout 4. And GameWorks technology is in many of the major game engines, such as Unreal Engine, Unity and Stingray, which are also increasingly being used for non-gaming applications like architectural walk-throughs, training and even automotive design.

What’s new — We’re continuing to add features to VRWorks — our suite of APIs, sample code and libraries for VR developers. For example, Multi-Res Shading accelerates performance by up to 50 percent by rendering each part of an image at a resolution that better matches the pixel density of the warped VR image. VRWorks Direct Mode treats VR headsets as head-mounted displays accessible only to VR applications, rather than a normal Windows monitor in desktop mode.
Why it matters — VRWorks helps headset and application developers achieve the highest performance, lowest latency and plug-and-play compatibility. You can see how developers are using what VRWorks has to offer at GTC, where we’re demonstrating these new technologies with partners such as Sólfar Studios (Everest VR), Fusion Studios (Mars 2030), Oculus and HTC.