Nvidia covered quite a lot of topics at SC15 but we will be covering only the main event hosted by the CEO Jen Jsun-Huang. If anyone’s interested in the rest of the proceedings, a complete list (and other information) can be found over here. Since this was the Super Computing conference, Nvidia focused on the scalable HPC side of things (naturally) and mentioned some old and new initiatives. Tesla is the primary product of interest in this segment, so the Tesla series of GPUs featured heavily in the sessions. 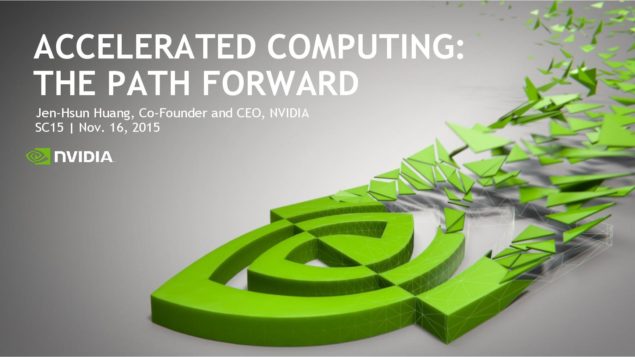 The CEO begun by mentioning that Nvidia GPUs are in more than 100 supercomputers of the Top500 list. Tesla products also account for around 1/3 of the total FLOPs that are powered by accelerators right now. Nvidia’s products also managed to win 23 out of 24 designs of new and upcoming super computers and have grown at 50% CAGR over the past few years.

Nvidia’s products are differentiated into two primary segments: Low Power – where efficiency matters in a hyperscalable system and High Performance – where raw power is the only prerequisite. These markets are led by the Tesla M4 (Low Power) and Tesla M40/Tesla K80 (Power) respectively. The Jetson TX1 module also made an appearance. The Nvidia Tegra X1 powered module has a wattage of under 10W and can achieve a performance of 1 TFLOPs with 256 Maxwell based cores.

Nvidia then talked about the Tesla K80 (the company has not released the Tesla M80 GPU which would have been powered by a Maxwell core and appears to have skipped over this nomenclature completely) which is currently the most powerful accelerator in the world. The accelerator which boasts a peak DP of 2.9 TFLOPs with Boost consumes 300W and will be succeeded by a Pascal derivative next year. The company mentioned that by equipping just 1/3 of the nodes in a super computer with the Tesla K80 accelerator they can more than double the jobs completed per day. 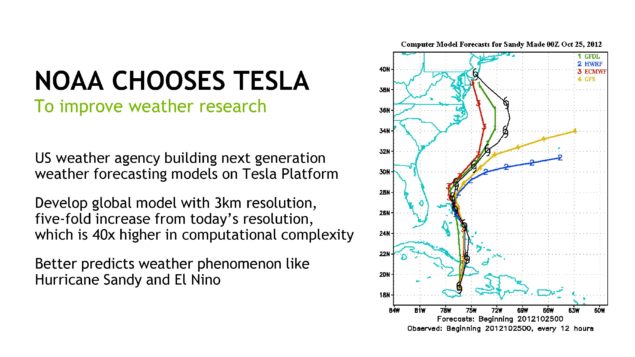 Finally another important point to note is that the company has managed to get a design win from the US government, namely that of a supercomputer for the National Oceanic and Atmosheperic Administration (NOAA). The SC will have upwards of 750 GPUs and will come online sometime next year. It will have a resolution of 3KM which is 5 times higher than that of any other existing system and can solve scenarios 40x higher in difficulty. ’s other major focus at SC15 is to announce their next US government contract win. It is possible that the cluster is powered by Pascal, although Maxwell is still very much on the table.