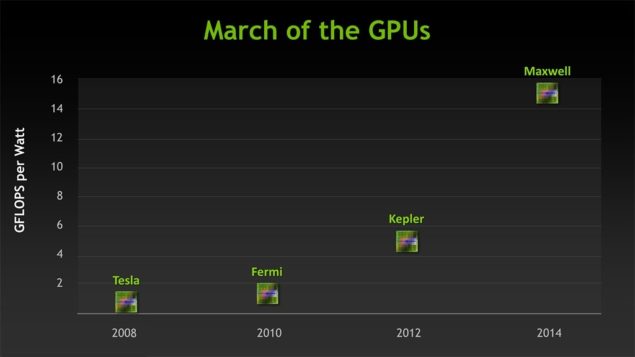 At SC12 conference, NVIDIA released its new GPU roadmap which shows that the 20nm Maxwell GPUs would officially arrive in 2014. In addition to Maxwell, NVIDIA is also planning to launch a Kepler refresh in first half of 2013.

NVIDIA 20nm Maxwell GPUs would feature more than double the performance per watt over current generation Kepler architecture. Maxwell GPUs would also be integrated with the Nvidia's project Denver which fuses general purpose ARM cores alongside the GPU core. Xbitlabs recently got many details on Project Denver, the Denver is basically an custom built ARMv8 64-Bit Processor which would be highly beneficial for computing purposes such as workstation and server usage.

The roadmap still mentions that the Maxwell GPUs would be able to churn out 14-16 GFlops with the much more power efficient designs compared to Kepler 28nm. However the regime of Kepler is far from over, as in 2013 the company plans to launch a refresh to its Kepler lineup. While recently showing the power of its GK110 Kepler core used in the Tesla K20 and Tesla K20X parts, there's no doubt that the same chip with a different codename such as GK114 or GK204 could enter the consumer market.

Reports suggest that the flagship of the GeForce 700 series, GeForce GTX 780 could have over 2000 cores. A much real number would be 2304 as being reported by Chip.de. The core count is not the only change Kepler 2 would get, NVIDIA would also be bumping up the memory interface bringing 3 GB GDDR5 buffer which would operate along a 384-bit interface ending the known bandwidth restrictions faced on GTX 680. The site also reports alleged clock speeds of the card such as 1100 MHz at stock and 1150 MHz boost while the memory could operate at 6.5 GHz effective frequency.

We have summed up details for the rest of GeForce 700 series lineup here. Overall, if the specs of the 700 series hold any truth than the next two GPU architecture from NVIDIA are one to really look forward to.