By Usman Pirzada
Nov 6, 2015 17:02 EST
Share Tweet Submit
This is not investment advice. The author has no position in any of the stocks mentioned. WCCF TECH INC has a disclosure and ethics policy.

Nvidia (NASDAQ: NVDA) recently posted its quarterly results for the third quarter of Fiscal Year 2016. The graphics giant posted a record revenue of $1.305 Billion dollars which is 13% more than the same quarter from last year.  With a GAAP diluted net income of $246 Million dollars, the company posted an earnings per share of $0.44 for this quarter. Things have been looking real good for green lately and their strong financials continue to represent their bullish trend. 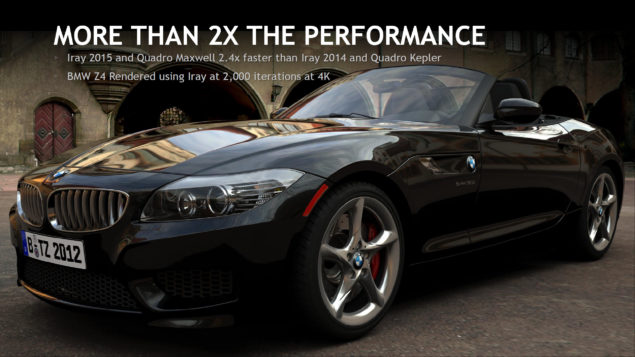 A slide from the Investor Day pressdeck of March 17th 2015. @Nvidia Public Domain

Mr. Jen-Hsun Huang had the following to say at the earnings call:

"Our record revenue highlights NVIDIA's position at the center of forces that are reshaping our industry," said Jen-Hsun Huang, co-founder and chief executive officer, NVIDIA. "Virtual reality, deep learning, cloud computing and autonomous driving are developing with incredible speed, and we are playing an important role in all of them. "We continue to make great headway in our strategy of creating specialized visual computing platforms targeted at important growth markets. The opportunities ahead of us have never been more promising,".

The company has all but finished its roll out of high end graphic cards of this generation (minus one major exception) and the revenue of this quarter comes mostly from consistent sales and a strong hold on its market share. With such a majority market share, Nvidia can manage to meet expectations without breaking much of a sweat. Infact, the company made a point of noting that they are not becoming complacent just because they have a majority share and take their competitor very seriously - all the while pointing out that AMD is a completely different company from Nvidia and not really comparable to green.

This year has seen them venture further into the Automotive side of things - yielding very promising results. Infact, it recently introduced its Drive PX chip as well - powered by the Tegra X1 - which is supposed to be a major earner once it gets the requisite design wins and production ramp.

At the time of writing, the company's stock is trading at $27.71 with a market capitalization of 15.11 Billion dollars. The share price has been up by 20% this quarter starting from $23. This past week has seen the bullish trend falter somewhat but the overall trend remains positive and this quarters strong earnings should put some of the bull back in its share price.  Without any further ado, here are the results and the highlights:

As can be expected from Nvidia (NASDAQ: NVDA), the GPU side of things was the primary driver behind the results. This includes the Geforce division as well as Quadro and Tesla divisions. Over $1.1 Billion dollars in revenues is accounted for by this particular business unit. This side of Nvidia (NASDAQ: NVDA) saw a healthy growth of 16% Quarter over Quarter and 12% Year over Year – both of which are very good indicators.

Nvidia (NASDAQ: NVDA)’s quarterly cash dividend saw an increase of 18%. The company has already returned an aggregate of $604 Million to shareholders in the first 3 quarters of Fiscal Year 2016 and aims to take the amount upto $800 Million by the year end. Nvidia has mentioned that it aims to return a cool $ 1 billion to shareholders in FY17. The quarterly cash dividend will be paid on December 14, 2015 and will be paid to all shareholders on record on the 20th of November 2015.

The company also ventured further into the territory of Virtual Reality and introduced two software development kits this year, namely the GameWorks VR and DesignWorks VR. The first is intended to be a dev kit for creating gaming and other visual experiences for Virtual Reality devices whileas the second is aimed at professionals wanting to integrate VR in their own apps.

As far as the automotive industry goes, Nvidia (NASDAQ: NVDA)’s tegra chips landed in more production vehicles including the likes of the Mercedes-Benz, Audi, Porsche, Bentley and Honda at the International Auto Show in Frankfurt. The partnership with Tesla Motors is also highlighted, since the chip is a pretty integral part of the Tesla, powering the digital instrument cluster and infotainment system.