By Usman Pirzada
Feb 28, 2016 11:21 EST
Share Tweet Submit
This is not investment advice. The author has no position in any of the stocks mentioned. WCCF TECH INC has a disclosure and ethics policy.

Self driving cars is one of the big things expected to rock the automobile industry in the future, and Nvidia (NASDAQ: NVDA ) has been betting big on its automobile sector. In fact the Auto Department and Tegra Development Services are currently looking to have an incredibly huge growth opportunity going forward. This article is dedicated to talking about one of the rather under-rated departments over at the IHV. At CES 2016 this year, Nvidia Corporation revealed its Drive PX2 chip - one of the most powerful chips in the world for autonomous driving. If Nvidia can get a sturdy holding in the autonomous driving industry - its fundamentals will become quite attractive. 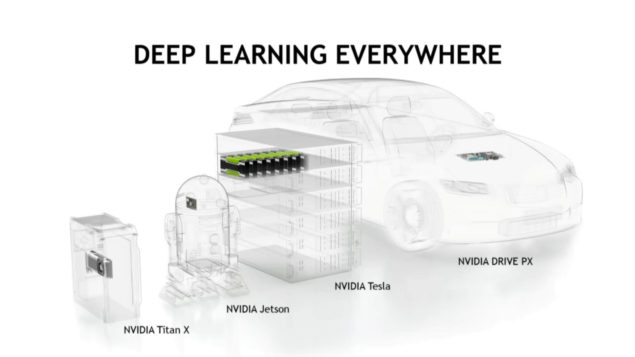 Nvidia's auto sector grew from 56 Million in Q4 FY15  to 93 Million in Q4 FY16 - which is an absolutely huge double digit growth (~66%). And what's more, this is just the tip of the ice berg, since the company's GPU architectural progression is trickling down to the Tegra levels and could be potentially disruptive over the course of the next few years. The company is reportedly supplying Alphabet with the chips to power its self driving cars and will introduce the insanely-powerful Drive PX2 in 2017 to car manufacturers. Considering the fact that nearly all other autonomous chip makers have very long product cycles - Nvidia could take them all unawares with its absolutely killer advantage: a product cycle of just a couple of years. 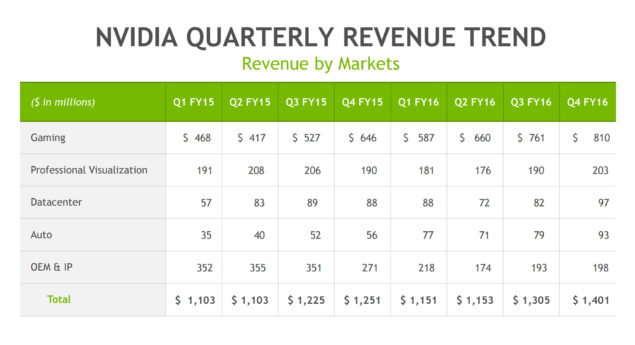 As I have mentioned in an exclusive editorial, currently, Nvidia's chips are being used to power the infotainment system and digital instrument cluster abroad Tesla cars with Mobileye Eye Q3 processor handling the actual autonomous driving. This was because the original chip available at the time (the Tegra 3) was not really up to the mark of performance which a custom designed silicon like the EyeQ3 can provide. If there is one thing that Nvidia (NASDAQ: NVDA) does best however, its R&D. Jump forward a few generations and we have the pascal architecture - which will outperform the measly Tegra 3 by leaps and bounds. Mobileye is expected to debut its EyeQ4 chip as well - which will be significantly stronger than its predecessor but unlike Nvidia - it cannot sustain the level of R&D and expects the EyeQ4 to have a large shelf life - where as green can spit out new chips every other year. 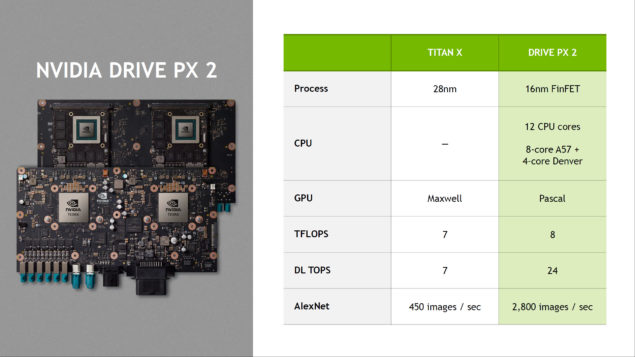 The Drive PX2 for example is slated to have 10 times the performance (with a grand total of 24 Trillion operations per second) of the original Drive PX. Something that is pretty darn amazing. That and the fact that the company is venturing into Deep Neural Networks and optimizing its automotive offerings accordingly - is a very impressive feat. Considering the fact that Nvidia has manged to bag design wins with Volvo, Ford, Daimler and Audi only adds to the bullishness shown by the Automobile and TDS department of Nvidia.

"Drivers deal with an infinitely complex world," said Nvidia co-founder and CEO Jen-Hsun Huang. "Modern artificial intelligence and GPU breakthroughs enable us to finally tackle the daunting challenges of self-driving cars."... "NVIDIA's GPU is central to advances in deep learning and supercomputing," added Huang. "We are leveraging these to create the brain of future autonomous vehicles that will be continuously alert, and eventually achieve superhuman levels of situational awareness. Autonomous cars will bring increased safety, new convenient mobility services and even beautiful urban designs - providing a powerful force for a better future."

“Due to our close collaboration with NVIDIA, Audi has the ability to integrate technology quickly and move at the same innovation cycle as the consumer electronics industry,” said Audi Head of Electrics/Electronics Ricky Hudi. “We will push the technology of artificial intelligence, of machine learning, to get the same recognition rate - or even better than a human being. For me this is the most disruptive technology - machine learning - in what you can discover now, and not just in the automotive industry."

The critical question here is whether Nvidia can translate its massive experience and success in the desktop GPU sector into the Automobile sector. If the answer to that question turns out to be a Yes, than the company will become a force to reckon with and will make it very difficult for any other autonomous driving silicon provider to compete with the green giant. NVDA stock is currently trading at $31.68 and has shown a gain of 40% over a year (up from $22.60).