Nvidia is one of the two modern makers of graphics processing chips, and the financially successful one I might add, but were still unable to score a design win in the console side of things (due to an under-powered CPU portion); even though their graphics chips are among the most powerful. At their recent quarterly earnings the company CEO Mr. Jen-Hsun Huang noted (factually correctly) that the latest mobile chips from Nvidia are better than the chips in current generation consoles in nearly all aspects – especially considering the flagship mobility chip performs equivalent to a desktop GTX 980. 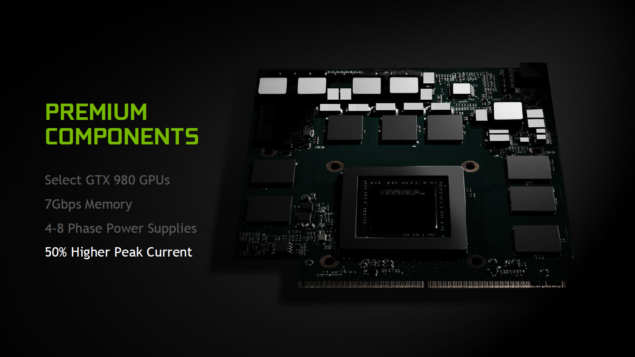 Nvidia: our notebook GPUs are much more powerful than consoles and capbale of immersive VR gaming

As most of our readers will know, there is a huge power difference between the high end PC gaming hardware and the hardware inside the console. This is because unlike an enthusiast PC rig, the budget to make a single unit of a console is very limited – as well as the thermal and electric envelop that the chips inside are required to operate. This means that high end desktop graphic cards – which are usually more expensive than a single PS4 end up having exponentially more power than the tiny chips inside the current generation consoles. Before we go any further, here is a quote from the earnings transcript

I appreciate you bringing up the notebook work that we did. Maxwell, the GPU architecture that we created and the craftsmanship of the GPUs we made are so incredible that it's finally possible for a notebook to be able to deliver the same level of performance as a desktop and our timing was timed so that people who want to enjoy VR with a notebook can finally do it. And so the latest generation of notebooks with GTX 980 are just amazing. I mean, they are so many times more powerful than a game console. It fits in a space smaller than a game console and it can drive VR. Everything you want to do, every game you want to play is possible on that thin laptop. And so the enthusiasm behind our launch with GTX 980 has been really, really fantastic. I appreciate you recognizing it. - CEO Nvidia, Jen-Hsun Huang

Now the chip in question here is the GTX 980. The mobile GTX 980 is a graphics chip like no other, it is equivalent in power to the desktop GTX 980 and has a hefty cooling and wattage requirement. But what you loose in battery life and heat management, you gain more in raw performance numbers. It is this chip that the CEO of Nvidia Corporation is referring to.

The comments he makes about the mobility chip being better than consoles might look a case of sour grapes (and it might actually be just that!) but they have very real facts supporting them. VR is clearly the new hot cake of this Industry – but unlike previous technologies, this one requires a sheer number of graphical horsepower behind it. The current standard (taken from the Oculus Rift) is of 2160x1200 @90 fps. This is a graphical load which the current generation consoles can absolutely not handle right now – not unless you massively reduce the polygon count, graphical settings, textures and probably not even then. Take a look at the following numbers:

The graphical load of the Oculus Rift VR standard is 3.75 times higher than the 1080p30fps standard and 1.875 times higher than the 1080p 60fps standard. This gives an idea of why current generation consoles aren’t really in a good position to power VR (without inducing severe motion sickness and nausea) whereas enthusiast rigs and notebooks, by sheer horsepower, very much are. Ofcourse, they will also be proportionally more expensive - something that the CEO failed to point out.

A copy of the full transcript can be found over at SeekingAlpha.

NVIDIA CEO: RTX Is a Home Run; I Look Forward to Upgrading Hundreds of Millions of PC Gamers

Epic: Smartphone Hardware Catching Up With Consoles Is A Super Exciting Vision For Game Developers