Update:  Videocardz has revealed that the card is/was going to be severely under-clocked as compared to the R9 295X2. Vesuvius was shipping with a massive clock of 1.018 Ghz and TitanZ only supported 695Mhz Base clock and 730Mhz Boost clock. The reason is quite obviously the air cooler which does not allow higher operating clocks. Another possible reason could be Nvidia looking at ways to make the card more efficient, TDP wise.

The Nvidia Titan Z has been postponed to... well, we don't know when exactly but our highly reliable source Sweclocker.com informs us that Nvidia's Dual GK110 card is no longer scheduled for an April 29th Release. The card will instead come later, as Nvidia fixes some PR issues. Now something very interesting, the same source tells us that rumor is, Nvidia pulled the release date so it could work on the Titan Z and make sure it beats AMD R9 295X2. In non-diplomatic words, it means that the Titan Z scheduled for April 29th was less powerful (in Gaming) than the AMD Vesuvius GPU. 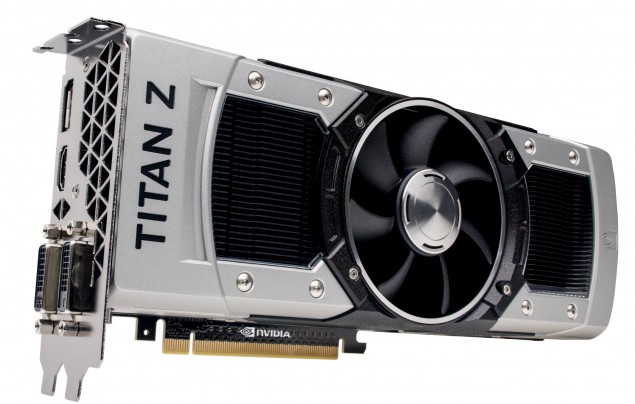 Now PR is everything. Take the Titan Z for example. The Titan Z is not designed for gamers. It is designed for Gamers/ Professionals on a budget.It should have significantly better D.P. performance than any other non-Quadro card on the market and D.P is rarely, if ever, used for Gaming. In fact I don't recall a single Gaming Scenario where Double Precision is used, but the fact remains that upon release, Titan Z will face the inevitable R9 295X2 comparison. Of course, the reviewers will put Nvidia's dual core beast against AMD's monstrous Vesuvius in a Gaming Showdown, and from what Sweclockers.com tells us, Green will loose. However, PR, like I already mentioned, is everything.

Now here is the thing, I am not exactly sure how Nvidia will increase the clocks. Higher then they already were (no confirmed reports on the same) that is, with the cooler being the bottleneck. Since the Titan Z runs on an air cooler, it has very limited TDP and air saturates after a certain limit, as any overclocker will tell you. They could introduce some design improvements or get better TIM. But that will all be very costly at this stage in time. Another alternative, which is just me and wishful thinking by the way, is that Green could go on to release the GTX 790 first, which if introduced with a liquid cooler will have a much higher chance of beating Vesuvius on release. Infact they could migrate Titan Z to an aio cooler too, but that would negate the Eng samples they sent to the press. An admittedly strange state of affairs but lets see what happens.