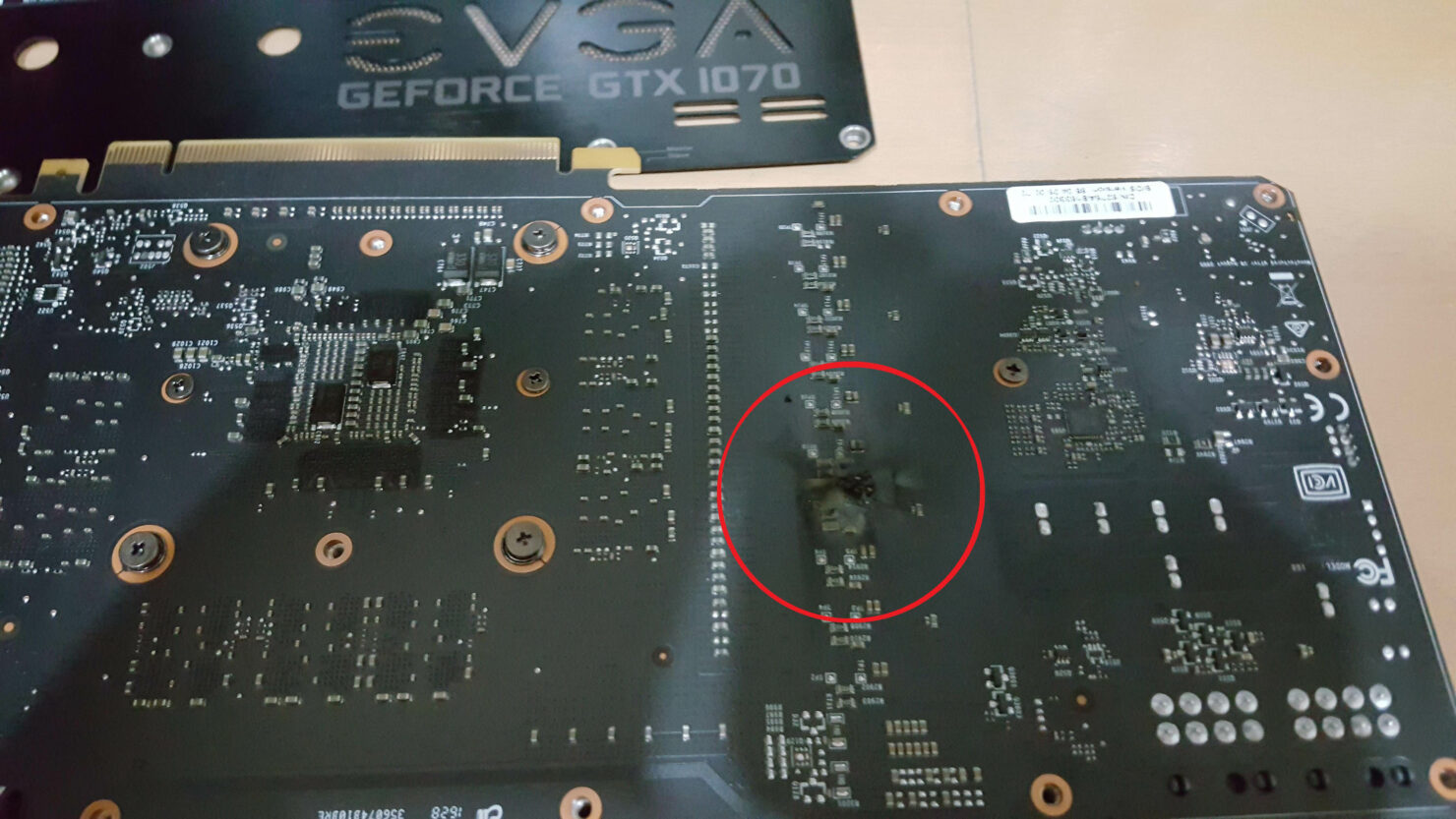 A devastating issue plaguing Nvidia GeForce GTX 1080 & GTX 1070 cards from EVGA causing them to burn out and die has been discovered. This came about after reports of EVGA ACX GTX 1080 and GTX 1070 cards suddenly going up in smoke started to pile up over the past week.

Hundreds of GTX 1080 and GTX 1070 owners have come out on EVGA's forum ( #1, #2), the Nvidia ( #1, #2 ), Build A PC & PC Master Race subreddits to describe their shock as they saw their graphics cards literally go up in flames.
One user reported his computer suddenly shutting down with a bright orange flame gushing out of his graphics card. While another reported seeing sparks followed by the screen suddenly turning black in the middle of a gaming session with foul smelling chemical smoke subsequently pouring out of his machine.

There were several investigations by a number of reputable technology outlets to try and identify the culprit behind it all. It was discovered that the issue originates from the voltage regulation modules which overheat leading to component failure and MOSFET blow out. The issue affects EVGA's entire range of Nvidia GeForce GTX 1080 and GTX 1070 cards equipped with the ACX cooler, all of which lack direct VRM cooling. This includes GTX 1080 & 1070 ACX, SC, FTW & FTW DT models. Essentially all dual fan models except the Classified.

Prior to this discovery, EVGA GTX 1080 and GTX 1070 owners had been consistently complaining about component failure, instability issues and black screens. All of which have now been linked to the same VRM overheating issue.

Drilling Down To The Core Of The Issue

EVGA's voltage regulation circuitry is not to blame for the mishap. The solution is rated to withstand temperatures of up to 125c and deliver up to 200 amps of current at that temperature. Enough to keep the GTX 1080's 180 amp requirements happily met with some small room to spare for overclocking.

Unfortunately a good VRM design is not complete without a sufficient cooling solution and EVGA completely skipped the latter. The VRMs have no individual heatsinks and are in no way connected to the GPU heatsink with thermal pads, as is often done to cool VRMs. Hot air gets trapped creating a hotspot which slowly cooks the circuitry. Which ends up heating itself, eventually crossing the point of thermal runaway and failing without warning.

Speaking to Gamersnexus.net professional overclocker "buildzoid" shed some more light on the issue.

"VRMs do not exhibit any signs of approaching a breaking point that can be measured without monitoring the temperature of said VRM. When the VRM hits the critical amount of stress, it will [enter a state of] thermal runaway and burn out with no warning."

Tom's Hardware's testing revealed that the VRMs can hit temperatures as high as 114c in an open bench at an ambient temperature of 22c whilst running Furmark. In a scenario where the graphics card is installed in an enclosed system with an overclock applied and an ambient temperature slightly higher,  it's not difficult to imagine how the 125c thermal limit can be exceeded, leading to the catastrophic outcome that we're seeing.

Buildzoid :
"Toms Hardware managed to take thermal images of the VRM reaching 106C and measure 114C with a thermal probe. This was in bench test scenario with 22C ambient. In a case where ambient temperatures range between 30 and 40C depending on airflow, that 114C can easily end up 125C+. A VRM trying to provide too much current at too high a temperature will quickly end up like the above from reddit."

Thankfully, EVGA has acknowledged the issue and has already implemented changes to the production line. Namely quipping all of its future graphics cards with VRM thermal pads to combat the issue. The company admitted that the lack of VRAM & VRM cooling was an oversight and has promised to honor warranties.

It is currently offering existing GTX 1080 and GTX 1070 owners a VRM thermal pad kit for free, which you can get here. Alternatively, users have the option to return their graphics cards directly to EVGA in exchange for a card with the thermal mod already installed.

In the meantime, if you were planning to buy any dual fan GTX 1080 or GTX 1070 from EVGA we would advise you to hold off that purchase until new units equipped with the thermal mod are rolled out. We would highly recommend that all existing EVGA GTX 1080 and GTX 1070 owners opt for the thermal mod as soon as possible to avoid any hardware damage. Sadly, this and the memory issue which affects GTX 1070 cards from a number manufacturers, including EVGA, makes owners of Nvidia's most popular card also the least fortunate.