Reports coming in from Asian Pacific retailers suggest that the NVIDIA GeForce RTX 3070 will have a considerably larger supply than the GeForce RTX 3080 and GeForce RTX 3090 at launch. The report comes from PC Watch who has received word from various retailers in the Akihabara tech market-based in Tokyo, Japan.

Dospara, one of the main retail outlets at Akihabara, has announced that it will initiate sales for the NVIDIA GeForce RTX 3070 graphics cards at around 20:00 (JST) when the first tickets will be handed out. The store expects payments to initiate by 21:00 (JST) following product delivery by 22:00 which should last just 10 minutes. The graphics card will be sold on a first-come & first serve basis which is similar to lots of North American stores and how they process orders for new launches.

According to PC Watch, they didn't just visit Dospara but also talked to several other retailers based in the Akihabara market. All of them have guaranteed that the NVIDIA GeForce RTX 3070 will have a considerably larger stock than the GeForce RTX 3090 and GeForce RTX 3080. It remains to be seen if they are referring to the launch stock or the overall stock since the launch stock could've gotten a bit better due to the delayed launch from 15th October to 29th October but if the launch stock runs out quick, will there be enough of a supply coming through the backchannel to meet demand even after the launch. 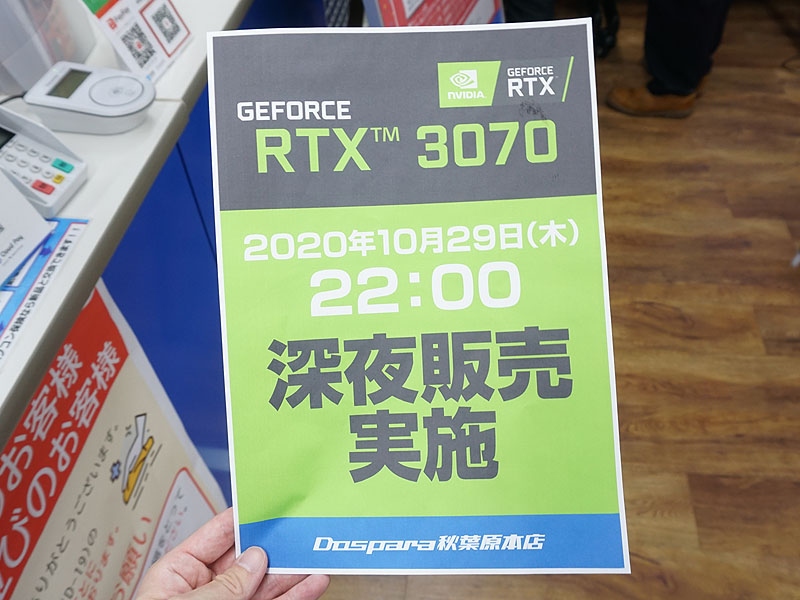 This report is also based on just words from Asian Pacific retailers. We don't know what the stock & supply would look like in other market regions, especially North America. Danish retailer ProShop has released its own demand versus supply statistics for the NVIDIA GeForce RTX 3070 and their total numbers don't look that great. NVIDIA and its partners are only able to meet 7.4% of the demand for the upcoming card so it remains to be seen how things are going to unfold on 29th October.

The GeForce RTX 3070 is definitely positioned in a very interesting spot. The reviews for the card arrive a day before AMD's Radeon RX 6000 series unveiling and the card launches in the retail PC segment a day after the unveiling. Many consumers will definitely wait to see what AMD has been cooking with its RDNA 2 GPU architecture for the gaming segment but from what we know, even at this close to launch, the RTX 3070 demand is at an unprecedented scale simply based on the fact that it offers 2080 Ti equivalent performance at $499 US. It remains to be seen if AMD can top the card in terms of performance/$ on 28th October.