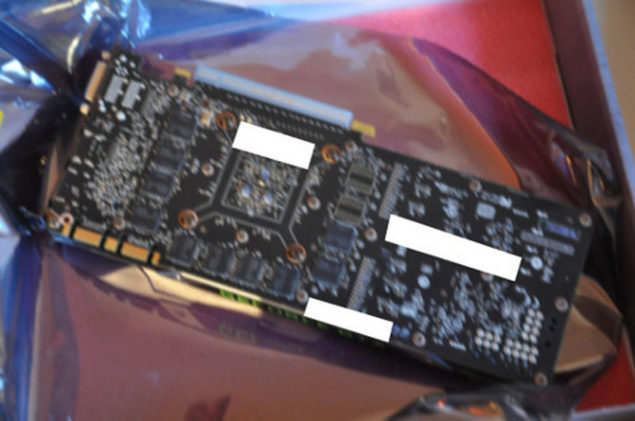 Note: Before reading this article, we would like to advise our readers that the news below is a rumor based on a tip from an anonymous tipster hence should be taken with a grain of salt.

We heard news about NVIDIA preparing another GK110 GPU for release in summer known as GeForce GTX Titan LE. Today, we received a tip from an anonymous user who seems to got his hands on a sample of the upcoming graphic card.

The information we received came with a backside PCB shot and a few technical details of the upcoming GeForce GTX Titan LE GPU. As you can note, the PCB is remarkably similar to the original GeForce GTX Titan minus a few memory chips. In total, there are 20 memory chips (10 on back, 10 on front) which amounts to a 5 GB GDDR5 memory buffer across a 320-bit interface. Given NVIDIA's Titan and 600 series specifications, the GTX Titan LE would have its memory clocked at 6008 MHz effective frequency. We can't see anything else new on the board. The power scheme remains the same which includes 8+6 Pin PCI-e connectors, 2 SLI Gold fingers, DVI-DL, HDMI and Display port for display connectivity.

It is also seen that the GTX Titan LE uses the same cooler as the GTX Titan so the overall design would be very similar. The only thing that would be changed is the GK110 with reduced core count around 2304-2496 and a 5 GB GDDR5 (384-bit) memory. Hopefully, we would be looking at a lower price range around $659-$759.

The following was mentioned by the user himself:

The tipster says that no official name for the GPU has been decided yet so it could possibly mean that the Titan LE could be an internal codename and the card would be officially called something else. It was Sweclockers however who reported this first that the new card would be called Titan LE and they were quite accurate about the GeForce GTX Titan name too. Hopefully, this and alot more would be made clear when the card launches in its reported Q3 2013 schedule.