Now that the hype surrounding the Maxwell flagships is fading away, we turn our attention to the youngest sibling that is still lagging behind: The Geforce GTX 960 GPU. Virtually nothing is known about this card. All we know is that the GTX 780 Ti, GTX 780 and GTX 770 were discontinued with the exception of the 760. This kepler card stayed behind for the sole purpose of holding the fort till its Maxwell counterpart arrives. Today we take a look at simulated benchmarks from the well known, DG Lee, who has once again used his proprietary equation system great effect.

The basic problem we have is that no one knows anything about the 960 apart from the fact that it will be releasing in october. We also know that it will be slower than the 970 and based on the GM204 die (though this is pretty much common sense). The card will target the Sub $300 price point and will probably retail for around $250. Which means it will be targeted dead center at AMD's Tonga Offering. According to the specs of its successor, the GTX 960 should have 10 – 12 SMM (Streaming Multiprocessor Maxwell) which equates to a core count of 1280 – 1536 with the latter being more likely than the former. The card will probably come with 2GB worth of GDDR5 memory if Nvidia’s previous patterns are any indication. Anyways here is the probable performance of the GTX 970 (sourced from IYD.KR) with exactly 1 less SMM: 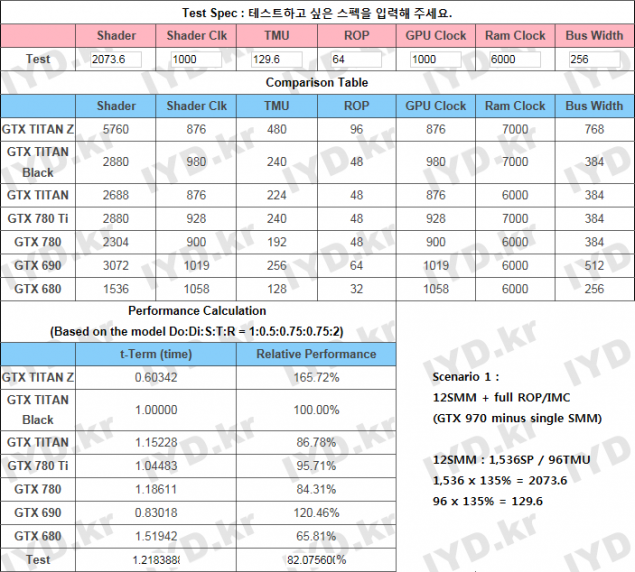 Sadly however, this table does not include any of the new Maxwells as reference points so you will have to use GTX 780 Ti's performance as the base line. The GTX 980 is actually better than the 780 Ti by about 10% or so. keeping that in mind we are looking at a figure of 104% for the GTX 980. The simulated Geforce GTX 960 scores 82%, which is pretty amazing considering the 780 scores 84%. The card is obviously a very worthy successor for the GTX 760, though this is hardly surprising considering the efficiency of the architecture. Even if you account for lack-of-ideal conditions in real life you are still looking at higher than 770 performance from a 760 successor. DG Lee has also gone through a couple of unpleasant scenarios which you can find at his site IYD.KR. Do note however that all these tests were conducted virtually in Ideal conditions, therefore by definition they will not be 100% correct.