NVIDIA's next generation budget-friendly GeForce GTX 960 graphics card may have been postponed to Q1 2015 as reported by GDM.OR.JP. The Japanese based retailers which are highly accurate with dates and specification of upcoming products have revealed that due to strong sales for the GeForce GTX 980 and GeForce GTX 970, both cards with remain the flagship GeForce 900 series products for this year while the more budget friendly and sub-$300 US cards will hit the market next year. 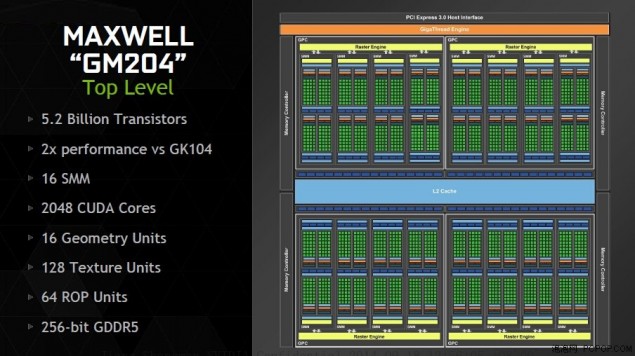 The NVIDIA GeForce GTX 960 was initially rumored to launch in October 2014 but as explained above, the card will now be hitting the market along with several other Maxwell based parts in Q1 2015. There's still no official confirmation regarding this and we know there won't be any from NVIDIA on unreleased products and we will have to wait and dig out the information ourselves but as far as specifications go, we did a analysis of the some of the possible scenarios which NVIDIA can adopt for the GeForce GTX 960.

Just a few hours ago, NVIDIA introduced their GeForce 900M series "Maxwell" mobility lineup which include two new flagship parts after the 3-Year stay of the previous Kepler based GK104 parts. The GeForce GTX 980M and GeForce GTX 970M are the new flagships in the market powering a slew of high-end to premium notebook devices across the market. This is the single and most biggest update which has come to the mobility market in some time since both team NVIDIA and team AMD have been releasing rebrands of their Pitcairn and Kepler GK 104 parts since the last three years hence you might be looking at bigger than normal performance updates.

Now this part is entirely speculation but from what I can see and remember, the Kepler generation had two *60 parts. The GeForce GTX 660 and GeForce GTX 660 Ti. The GeForce GTX 660 Ti had the GK104 core while the GTX 660 had the GK106 core. Now this was a huge difference between the cards. Both cards relied on a 192-bit bus interface with 3 GB VRAM. This time we might see one or even two cards, the GTX 960 Ti and GTX 960. The price for the faster GeForce GTX 960 will almost certainly be $249 US if there are two parts while the other would cost around $199 - $229 US. If there are two cards, then we can see the same configuration as the mobile parts for each card. The faster one featuring 1536 cores and a 256-bit bus followed by the slower and cheaper one featuring 1280 cores and 192-bit bus. But the hard part is what if there's only one card? Then we might possibly be looking at the 192-bit solution. NVIDIA does have a habit of releasing cut down budget cards in the market and this might be a repeat since the GTX 970 was two SMs cut from the flagship Maxwell and the 960 might be a similar cut down version.

We didn't confirm anything but just pointed at a few things you can expect to come. The card looks like a Q1 2015 launch and whether or not its true, will be found out this month. To keep things heated up in the graphics industry, AMD might have an event planned for this week as indicated by their statement on Twitter but let's see if its related to the price cut that was instated a few days ago or something more than that.