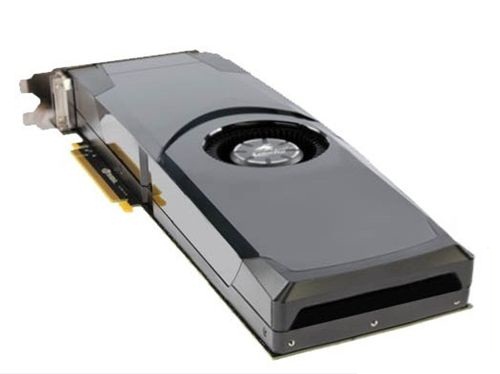 The first picture of NVIDIA's Upcoming flagship GeForce GTX 690 has been unveiled. A day earlier, NVIDIA showed a teaser for an upcoming announcement, Sweclockers later confirmed that it was the GeForce GTX 690 which would be the Dual chip flagship GPU which launches in early May.

The picture shows the card from its rear, Its quite long and has a cooler shroud similar to the one we saw on GeForce GTX 680. A single blower fan provides air to the interior components. Its unknown whether NVIDIA would equip each core with its own vapor chamber like the GTX 590 cooling design.

Power would be supplied through dual 8 pin connectors. Specifications include two GK104 chips equaling 3072 Cuda core and a 4GB GDDR5 256-bit memory. TDP is said to be around 300W. More details are expected to arrive by the end of this month.