A photograph showing Nvidia's upcoming flagship Pascal GeForce GTX 1080 graphics card has just made its way to the web. It depicts a silver graphics card shroud, clearly bearing the Nvidia logo on the right and an engraved "GTX 1080" on the left. The allegedly new NVTTM cooler maintains the same familiar aesthetic look of Nvidia's current GeForce lineup. Featuring a silver metallic body with black accents and a small acrylic window sitting above the vapor chamber and heatsink fin array. 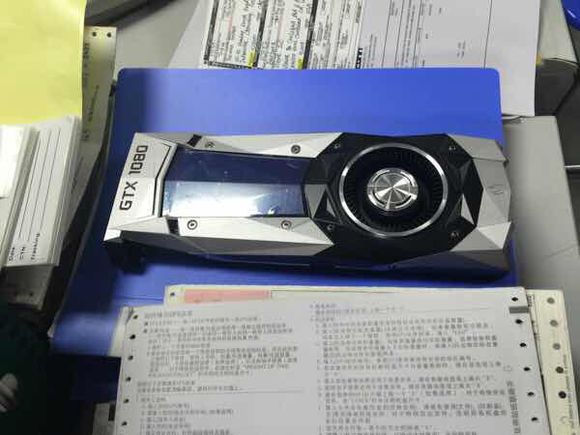 The new design adopts a much more aggressive look with many sharp angles throughout the exterior of the metallic exoskeleton. Although notably, only the cooling unit's shroud is visible in this picture. It's difficult to tell if it includes the actual heatsink as no fins are visible behind the acrylic window. Additionally, we can clearly see that there's no printed circuit board beneath the shroud, no PCIe connector or rear bracket. So this is just the external body that's allegedly of aGTX 1080 and not an actual graphics card.

An earlier photo that was leaked online showed another, identical, metallic shroud with the "GTX 1070" moniker engraved instead. We could very well be looking at the creation of a modder that designed these shrouds for his own personal amusement. There's no way of telling whether these are actual Nvidia made or the product of a creative enthusiast. 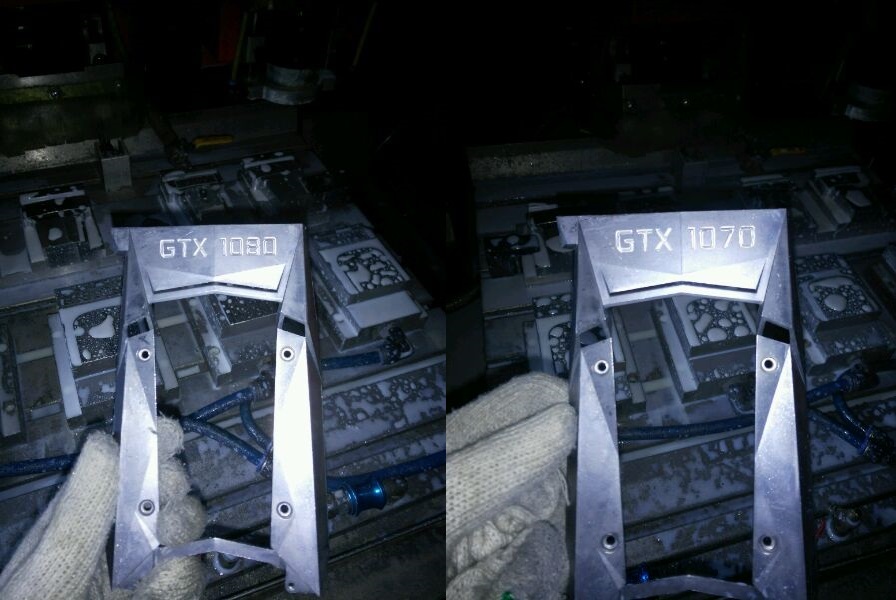 Whether Nvidia will actually name their next generation GTX 980 and GTX 970 replacements GTX 1080 and GTX 1070 has been a subject of fierce debate. It's important to point out that there's very little evidence that Nvidia will even use a 1000 series naming convention for its upcoming products rather than introduce an fresh one as they have historically done over the years every time a given naming scheme had ran out.

All leaks that have surfaced to date with regards to Nvidia's release plans for the GTX 1080 and GTX 1070 have pointed towards a scheduled announcement at Computex with product availability in June. The leaks have been piling up since earlier last month. We've seen die shots of Nvidia's GP104 and GP106 GPUs leak. We've seen most specifications for Nvidia's GTX 1080 and GTX 1070 also leak out. Including 8GB of GDDR5/X memory and a 256bit memory interface for both cards and around two thousand Pascal CUDA cores for the GTX 1080.

We also spotted several benchmarks of Nvidia's upcoming Pascal GeForce GTX series lineup. Which showed performance that's ahead of the GTX 980 Ti and GTX 980. The latest whispers claim that Nvidia's GeForce GTX 1080 is powered by the GP104-400 GPU, the "full fat" variant of the GP104 graphics processing unit. Which is also set to power the GTX 1070 all be it with a few CUDA cores and other on-chip resources lasered off.

We dove deep into Nvidia's Pascal architecture after the company's GTC 2016 reveal of the Tesla P100 in April. A powerful accelerator based on the company's largest ever GPU, the Pascal GP100 which will be launching in 2017. We discussed all the architectural updates that Nvidia has made to Pascal which I'd highly recommend that you check out if you're interested in finding out more about Pascal's performance characteristics. 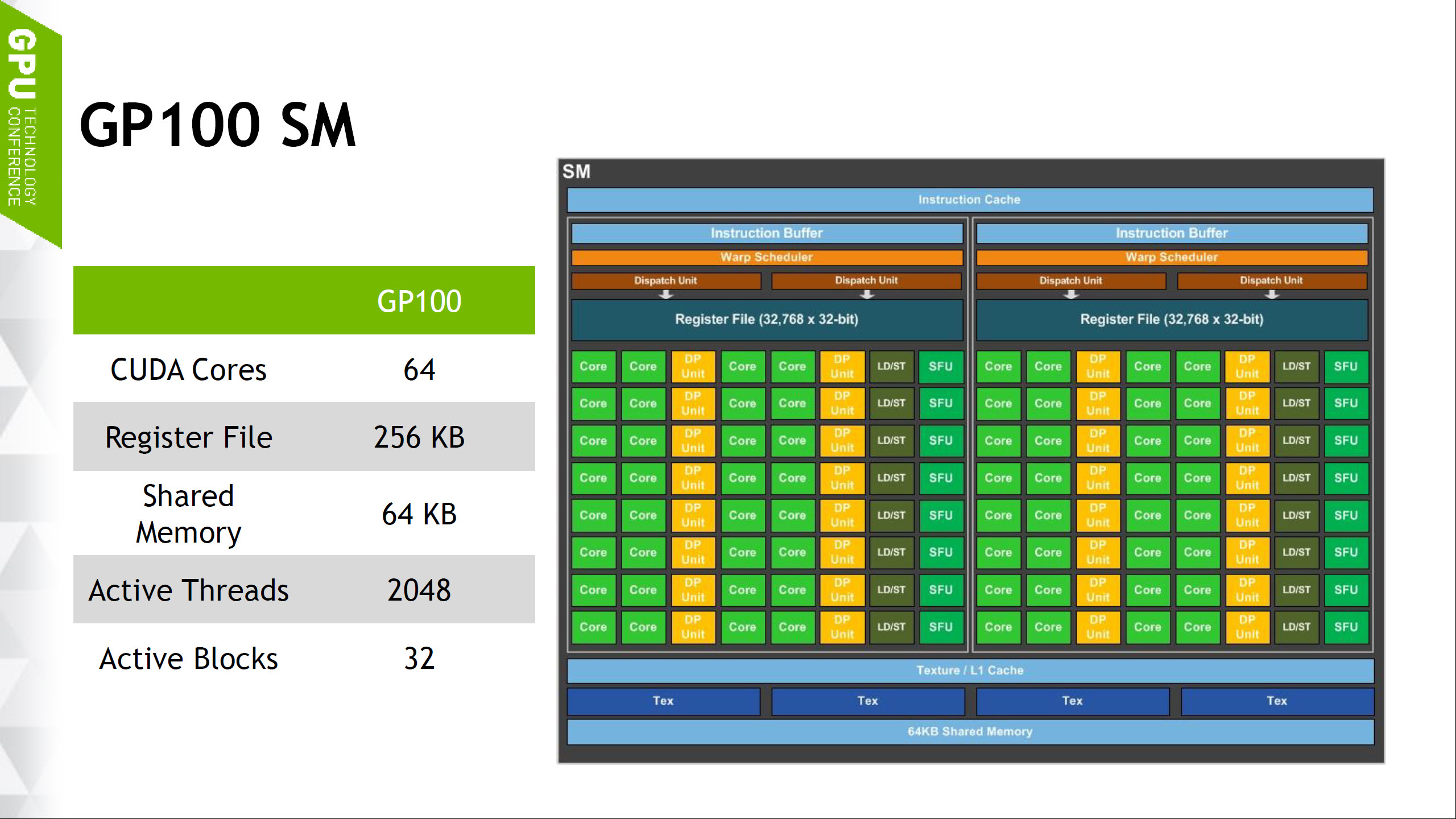 A few very significant changes from Maxwell to Pascal stick out. Each Pascal CUDA core has been beefed up considerably compared to Maxwell and clock speeds have gone up by 33%. So core for core, Pascal will be much faster than Maxwell.

The GP100 GPU features 6 GPCs, Graphics Processing Clusters. Each contains 10 Pascam SMs, Streaming Multiprocessors. Each SM contains 64 Pascal CUDA cores. Which means that each GPC houses 640 Pascal CUDA cores. Since the GP104 GPU is almost exactly half the size of GP100, If Nvidia maintains the same 10 SM per GPC design,the GTX 1080 should feature 3 GPCs and 1920 CUDA cores. And up to 2048 CUDA cores if Nvidia decides to tweak the design and opt for a 4 GPC layout with n 8 SMs per GPC.

In either case, with Pascal's significant architectural improvements and very high frequency increase in mind. A 1920-2048 CUDA core GTX 1080 graphics card should end up being faster than a GTX 980 Ti. The performance delta should be reminiscent of what GTX 980 brought to the table when it launched compared to the GTX 780 Ti. A 15-20% performance increase at a lower price point. That being said the GTX 1070 should be the star of the lineup, delivering GTX 980 Ti comparable performance at a much more affordable price point. Again similar to the performance/$ gains that the 970 offered compared to the 780 Ti.

AMD's Polaris GCN 4.0 architecture is purported to deliver similar gains over the company's current GCN iteration, we'll be detailing those in an upcoming architectural deep dive piece as well. Polaris 10 and Polaris 11 based cards, R9 490, 480 and 470 series, are also pegged for a June launch against Pascal. So we can't wait to see both Pascal and Polaris in action this summer.