The first stock and overclocked performance results of NVIDIA's GeForce GTX 1080 graphics card in 3DMark have leaked out by Videocardz. There are still a few weeks before the reviews go live but users are already demanding to see performance results of the upcoming graphics card. The NVIDIA GeForce GTX 1080 was launched on 6th May and would be released in the retail market on 27th May.

The NVIDIA GeForce GTX 1080 packs all it needs to run all modern and upcoming AAA titles.

First thing we want to tell our readers is that 3DMark performance doesn't reflect to gaming performance and hence should be a metric to analyze the synthetic performance of the card in various benchmarks. The game benchmarks would yield different results based on driver optimization and GPU vendor optimizations. 3DMark still is the most used benchmarking utility so it makes sense to give a comparison to our readers. 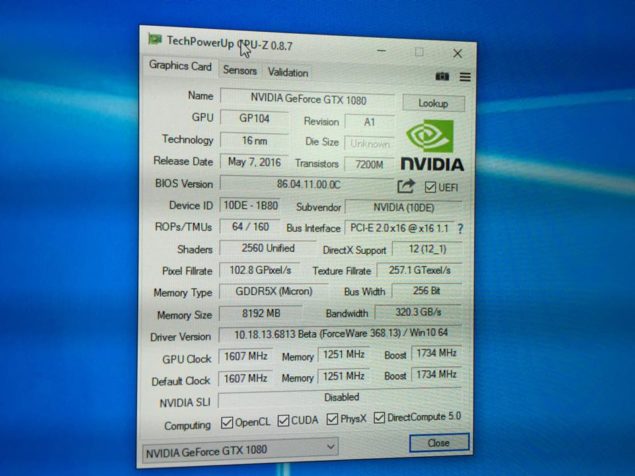 The final specifications of the GeForce GTX 1080 have been revealed by HardwareLuxx who posted a GPUz shot of the graphics card. The NVIDIA GeForce GTX 1080 features the GP104-400-A1 GPU with 7.2 Billion transistors. The GPU comes with 2560 CUDA cores, 160 Texture Mapping Units and 64 Raster Operation Units. The card has clock speeds of 1604 MHz and 1733 MHz which deliver up to 9 TFLOPs of single precision compute performance and can boost to higher clock speeds with the new GPU Boost 3.0 algorithm.

NVIDIA features 8 GB of GDDR5X memory on their GeForce GTX 1080 graphics card. The next generation GDDR memory runs at 10 GB/s effective speeds along a 256-bit bus. This delivers a total cumulative bandwidth of 320 GB/s. The card has a pixel fill rate of 102.8 GPixels/s and texture fill rate of 257.1 GTexels/s. The card has a 180W TDP which will be powered through a single 8-Pin connector. Display outputs include 3 Display Port 1.4a, HDMI 2.0b and a single DVI-D port.

You can see the performance chart in 3DMark below which shows surprising gains over the current 28nm cards such as the GeForce GTX 980 Ti, GeForce GTX Titan X and the Radeon R9 Fury X. The card being really cool and efficient allows clocks to boost up to 1860 MHz which is beyond its advertised boost clocks. This allows the card to crunch better numbers and should be the case for almost all NVIDIA GPUs as they tend to boost to the higher clocks easily.

These performance results show that the GeForce GTX 1080 runs great on stock speeds but the card is built for extreme overclocking so let's take a look at some overclocked performance numbers too.

These overclocked performance numbers were obtained at 2 GHz. The 3DMark Firestrike Ultra score increased from 4998 points to 6232 points. On 3DMark Firestrike Extreme, the score jumped from 10367 points to 12911 points. Finally, in Firestrike Performance, the score jumped from 21828 points to a massive 26500 points. These increases were told to us as just preliminary results through overclocking which is easily achievable on Founders Edition cards (Air cooling). Expect overclockers to break massive numbers with this card at launch.

The NVIDIA GeForce GTX 1080 will be available to purchase on 27th May in reference and custom flavors. The GTX 1080 will have a MSRP of $599 US while NVIDIA will be selling their Founders Edition (Reference) card for $699 US which is a $100 US premium asking price. It will be really interesting to see how the GTX 1080 and GTX 1070 hold up in modern titles based on DirectX 12 and Vulkan API.