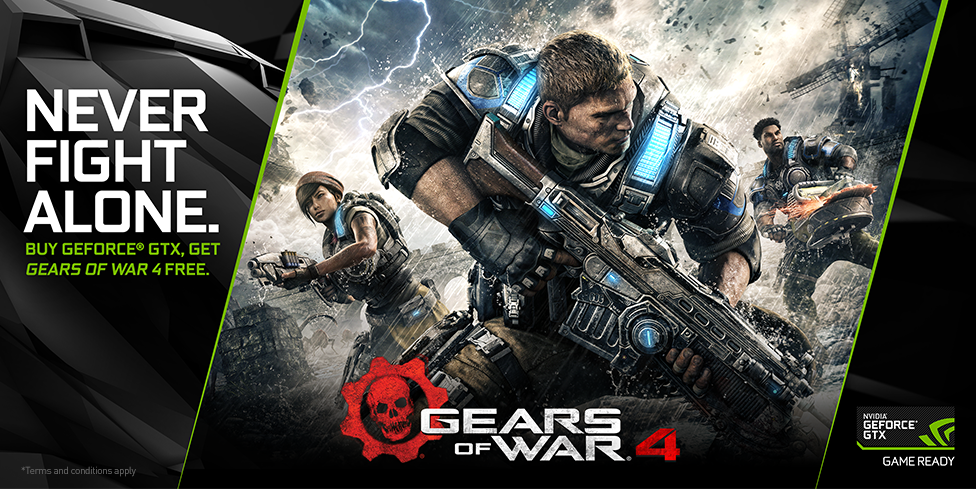 Check out the exclusive NVIDIA footage down below, brought to you by NVIDIA’s Gaming Network (NGN):

Gridlock is a fan favorite map from the original Gears of War that made a return in Gears of War 2 and Gears of War 3.  This version of Gridlock has a ‘Reclaimed Beauty’ look, with overgrowing foliage beginning to take over the buildings. The back part of Sniper Tower is slowly being eroded into the sea, while the two towers now have a Hotel and Café look to differentiate the environment. The classic ‘Gridlock bell’ in the tower is back as well.

Guardian gameplay mode is a returning fan favorite mode from Gears of War 2 with the goal of keeping your leader alive while assassinating the enemy leader.  New for Gears of War 4, leaders now have a ‘Gold Dipped’ look to make them stand out more to players. In this mode, killing the leader prevents any more respawns for their team, turns into one life left elimination. In a nod to classic gameplay, the Boomshot still spawns at the Station Arch, and the Longshot is still up in the Sniper tower.

Gears of War 4 follows the story of JD Fenix, the son of legendary war hero Marcus Fenix. After an attack on their village, JD and his friends, Kait and Del, must go out into the wilds of Sera to rescue the ones they love from a monstrous new enemy, known as the Swarm.

As reported earlier, a free copy of The Coalition's Gears of War 4 can be obtained with the purchase of a GeForce GTX GPU or select GeForce GTX-based systems and notebooks until October 30, 2016.

Gears of War 4 will release on October 11 for Xbox One and Windows 10 PC.