NVIDIA announced their latest 20nm Tegra X1 SOC at CES 2015 which features the Maxwell core architecture and several ARM cores to bring great performance and efficiency over last years Tegra K1 SOC. We have listed down the specifications of the Tegra X1 SOC and devices which will make use of the new SOC such as the Drive PX and Drive CX models that are going to be used by the automobile industry. 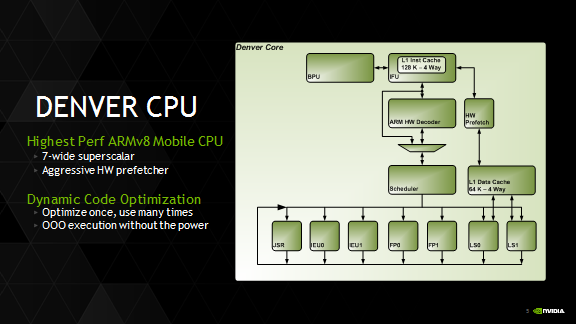 While it looks to be a great SOC from the benchmarks and specifications provided by NVIDIA, one thing that still doesn't make sense is why NVIDIA didn't feature their custom 64-bit CPU architecture, codenamed "Denver" in the Tegra X1 SOC. If you go a year back, NVIDIA launched their Tegra K1 192-core Super chip much like the new Tegra X1 256-core Super chip. The difference was that Tegra K1 was available in two variants, a regular Quad core, 32-bit ARM Cortex A15 based and a dual-core (multi-threaded) SOC featuring the custom designed 64-bit ARM v8 cores on board. The 7-Way Superscalar compute architecture resulted in a good boost over the quad core 32-bit variant in several devices such as the Xiaomi MiPad.

While we are expecting the same two variants for the Tegra X1 or Erista as it was formerly known, NVIDIA planned to use regular off the shelf A53 and A57 cores in two stacks of four cores each. So the question, is Denver off the roadmap? No, thanks to Arstechnica who were able to get an official word regarding Denver from NVIDIA, it is revealed that NVIDIA still has Denver on the roadmap and they are explaining why they did not went with Denver CPU architecture on Tegra X1.

The reason, NVIDIA says is that they have decided to take a "Tick-Tock" approach to launching their processors. So just like Intel, we will see a die shrink in one cycle and new architecture on the next coming cycle. So while we missed Denver CPUs on the new 20nm process node, the next 20nm based SOC update in line would most definitely be updated with the latest custom CPU cores from NVIDIA and they might not even use the name of Denver anymore, it will get an update too. NVIDIA also explains that the reason to go for Denver CPUs on 28nm Tegra K1 was because the process (28nm) was well-understood and matured. Same isn't the case with 20nm and it will take some time for the process to mature but will get significant updates in terms of performance and efficiency once that is done.

"The reason we did not use Denver on Tegra X1 is that decided to take a "tick tock" approach to launching our processors. Since TX1 is on a brand new 20nm process we decided to use off the shelf ARM cores. But Tegra K1 was on a well understood [28nm] process and hence we decided to use Denver on it. We still have Denver on our roadmap and will be using it in our future chips as processes mature." via Arstechnica

Now that it has been confirmed that Denver isn't scrapped, it remains to be seen which new SOC will actually make use of the upcoming CPU cores. Rumors are now spreading that NVIDIA already has 16nm FinFET in their consideration as a valid process candidate for the next Tegra product so its either that or a update to the X1 Tegra which can appear much sooner than we think and within this year. The Parker SOC which was removed from the previous roadmap seems to be a valid candidate as is was also mentioned to have a Denver CPU along with Maxwell GPU and based on a FinFET process node. While we cannot confirm this, we can assure you that we will get you the latest updates on Tegra as soon as their available.