Alright, I admit, I am not entirely sure whether or not I was being sarcastic when I wrote the headline, but I have to admit this new tech demo by green is pretty cool. TurfEffects is a new inclusion to the standing GameWorks library which allows highly realistic simulation of Grass and (probably) and some other similar shrubbery. One of the most interesting things about this tech is the fact that it is completely dynamic and fully interact able by the Player Character r ingame dynamic objects. 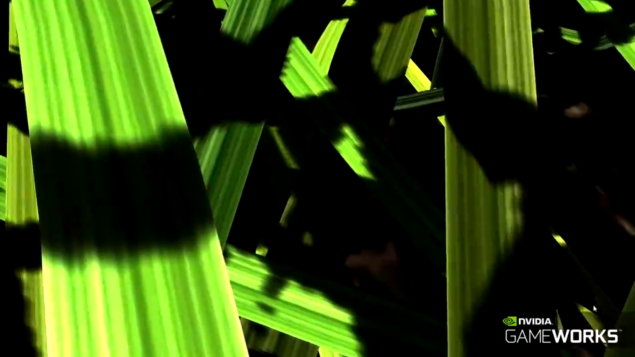 Now, I am not going to go into the customary lawn-mower-simulator joke, but you can find some pretty good ones involving the male reproductive organ and lawn mower simulators over here. Probably the most promising feature of this library is the grass-collision dynamics. This could have some pretty amazing game-play applications. For eg, gamers would be able to actually track ingame characters by the footprints left behind or grass crushed, or deduce the scale and location of a battle fought by its effect on the shrubbery. You can find the full tech demo on Youtube. Anyways here are the key features as listed by the devs:

Now the developers mentioned that the tech would work fine on a GTX 680; which I don't need to add is a pretty powerful card. If you consider the fact that this entire level consisted almost exclusively of TurfEffects apart from some primitives you start to get a more clearer picture of the requirements. If you have got HairEffects and other GameWorks effects running along with the actual game itself the total requirements should be pretty hefty for a playable frame rate. As with every other niche effect this one is targeted for the high end configurations to give them some way to utilize the full potential of high end and multi-GPU rigs. The grass can range from just 3 triangles to hundreds of triangles for well over a million blades of grass. It does feature continuous level of detail which should alleviate some of the performance hit but not all. TurfEffects is slated to be available in Early 2015.