Smoke and Liquids in modern games are mostly smoke and mirrors. The awe inspiring smoke that featured in the now-classic Battlefield 3 trailer was basically a set of 2D sprites that rotated to face the player. Similarly, any liquid surface is basically just a transparent material mesh with a shader on top running pre-programmed or scripted interactions.  Very rarely is there such a thing as a real dynamic interaction in games. Explosions are one of the few primary exceptions and now it seems, Nvidia has conquered two very major areas of interest: smoke and liquid. 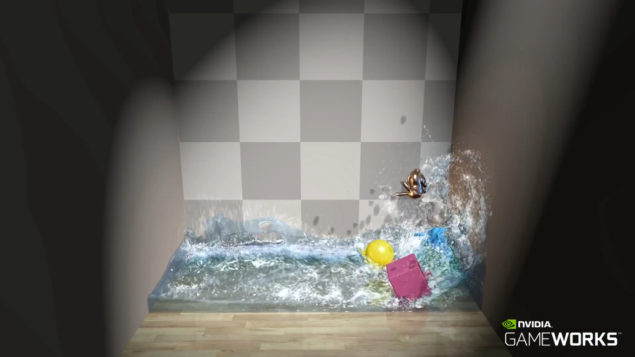 As most of you know GameWork's is Nvidia's delightfully controversial closed source game effects library. This includes the new PhysX FleX library which has liquid and smoke effects in development for quite some time now. However, Nvidia recently demoed a video showing off the full fledged capabilities of the volumetric engine and I must say it is pretty bad ass. One of the first things demoed was the liquid collision engine, which actually calculates a perfect liquid body in real time. Not sprites, not transparent material meshes but an actual voxel based liquid that can dynamically interact with any object.

Up next was an impressive demo showing volumetric smoke and its collision capabilities. As someone who frequently dabbles in FumeFX (3dsMax), which takes hours to calculate and render a perfect collision, the fact that Nvidia can do all this in real time with reasonable quality is pretty damn impressive. During the last scenes Nvidia showed off a full set with a water body splashing around and it makes me wonder just what kind of configuration they are using to run that. While these effects are jaw dropping, the real question is just how much will this tax the frame rates. If Nvidia can get something close to this PhysX FleX demo out, closed source and all, without massive frame rate hits, then it might actually be on to something. You can find the video over at Nvidia's Youtube Channel.