Disclaimer: The Conclusion given at the end has been given in a completely non-professional capacity. Though the Guidance has been given to the best of my abilities we cannot be held liable in any way whatsoever.

Nvidia Corporation (NASDAQ:NVDA) just recently outed its Q4 Results for 2014. The reported non-GAAP diluted EPS of $0.32 is an almost full double of the analyst's estimate of $0.18 (+ $0.14). Jen-Hsun Huang, CEO of Green attributed the results to the PC Gaming Sector which has been responsible for an 'outstanding year' for GPU Sales. The Gaming PC Market is shifting to the Mid - High end spectrum while PC sales in general have seen a Year By Year Decline. 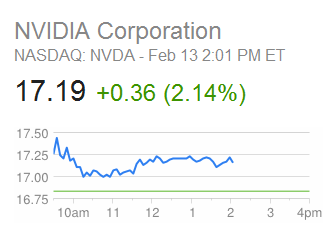 Ok lets start with a little overview. Geforce GTX GPU sale increased by nearly 50% this year. The Tesla K40 the highest end niche product was also launched. Denver was demonstrated and Tegra K1 targeted the auto industry. However operating costs increased and with the Tegra K1 no longer an ace up its sleeve, it remains to be seen how Green will fare.

I will be going through the Non-GAAP Result and the GAAP Result with Q1 2015 Guidance at the end. Nvidia (NASDAQ:NVDA) has repurchased stock worth of 37 Million Dollars and payed a Dividend roughly equal to 48 Million Dollars. Green is set to pay its next Quarterly Cash Dividend on the 20th of March 2014 to all shareholders as of Feb 27. Revenue for the fiscal year of 2014 was 4.13 Billion Dollars. GAAP Earnings Per Diluted Share were $0.74 while Non-GAAP Earnings Per Diluted Share were $0.99 (for FY14). The following results are given for both Q/Q and Y/Y analysis.

Nvidia (NASDAQ:NVDA) has a forecasted revenue of 1.05 Billion next quarter (Q1 FY15). Operating expenses are expected to increase next quarter and Capital Expenditure is expected to be 45 Million dollar for Next Quarter. For Long term holders the status is currently at "Hold Stock" with no tilt. The NASDAQ Rating is at Hold Stock with a Tilt to Buy

#NVDA's Q4 Results are Out. GAAP and Non-GAAP Summary as well Q1 FY15 Guidance given. http://t.co/E3w4uhljqg