Disclaimer: The conclusion given at the end has been given in a completely non-professional capacity. Though the Investment Advice has been given to the best of my abilities we cannot be held liable in any way whatsoever.

Nvidia's (NASDAQ:NVDA) Q4 results will be out on the 12th of February and analysts have already submitted their expectations. Trouble is, Nvidia (NASDAQ:NVDA) is at the very periphery of meeting the forecast, a slight nudge could theoretically send it below its expectations. 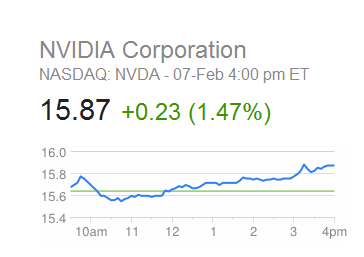 NVIDIA Corporation (NASDAQ:NVDA) Shares were undergoing some different trading activity a while back and investors purchased about 8,955 put options. It opened with a price of $15.46 and by the end of the trading session closed at $15.64 with a maxima of $15.68.  However with the earnings per share growing ever closer all eyes are towards Green with its recent unveil of the Tegra K1 SoC. Already Automakers have started embracing the Tegra K1 Vehicle (VCM) Module along with Google's (NASDAQ: GOOG) Vehicle Initiatives. With both companies pursuing serious contracts with the likes of Ford, this is only to be expected.

The major chunk of the problem lies with the fact that NVIDIA's (NASDAQ:NVDA) latest consensus shows that Green meeting its Expected EPS (Earnings Per Share) is not assured. The reason is that its stocks have a Expected Surprise Prediction (ESP) of 0% and a Zack's Consensus Rank of #3. For a surefire you need a Positive ESP and a Zack Rank of #1. Anything below #3 is not advisable and Green is bordering on the very edge of it being a negative forecast (i.e Sell Stock).

Not only that but competition from Intel Corporation (NASDAQ: INTC), Qualcomm Inc. (NASDAQ: QCOM) and Advanced Micro Devices (NYSE: AMD) will hurt profitability in the near future. Though according to Analysts NVIDIA (NASDAQ:NVDA) is well positioned to not only Defend its lead market share from AMD but also take market share away from Qualcomm thanks to Tegra K1 SoC.

Verdict: Simply put Nvidia is at the 'Hold' Stock status at the moment with a slight lean to Buy Stock. The consensus over at NASDAQ official states the same. However if Nvidia fails to meet Fourth Quarter Earnings, this should set off red flags with status change to Hold Stock with tilt to Sell Stock. Notice that it is already at Zack #3 with Zack #4 (and below) being Sell Rating. It all depends on these coming Q4 Results. You may remember that AMD did a brilliant turnaround with Profit declaration and if Green fails to meet expectations this might cause a negative impact with Shorts selling out.

#NVIDIA Corporation's Q4 Results will be out on 12th February. Analysts are worried that it could fall short. http://t.co/g3KVG3XMkG