Disclaimer: The Conclusion given at the end has been given in a completely non-professional capacity. Though the Guidance has been given to the best of my abilities we cannot be held liable in any way whatsoever. Nvidia's (NASDAQ: NVDA) first quarter fiscal results are out and they have reported an EPS of $0.29 they have successfully beaten analysts expectations of $0.17 (+$0.12) cents which is approximately double. The PC Market is under continuous allegations of being on a generally downward trend but despite of the bearish market, Green managed to pull through. However, the announcement saw some shorts pulling out in an early stock dip. 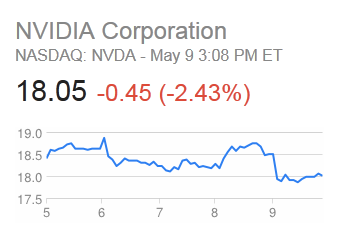 Nvidia (NASDAQ:NVDA) has seen some impressive sales figures in all its departments this quarter but none of them come close to the sales of the GPUs which account for 81% of the entire Revenue this quarter. However even though GTX sales saw an increase of 14% Y/Y they went down 4% sequentially. On the other hand the Tegra SoC Division accounted for 12.6% of revenue and grew 6% sequentially and 35% yearly, which is very decent growth. The reason for the same is attributed to the increased demand from the automotive industry (+60% Y/Y) and smartphone Industry (partial decline). GRID Computing and Tesla Sales remained strong due to VDI Deployments and an assortment of streaming gaming providers. However the fact remains that both the Tegra and GPU Division accounted for  93.6% of the entire revenue of the business. The increased demand for Maxwell (28m) i.e. the GTX 750 and GTX 750 Ti is attributed to the sales while the notebook sector saw a slight decline in demand. Here is the financial summary of the quarterly:

A more or less flat growth is expected from Nvidia (NASDAQ:NVDA) and the company should remain profitable through the next quarter. Shorts have already pulled out so now is the perfect time for buying stock if you plan to stay long. However 20nm Maxwell is not really expected soon, so Green will have to step up their game to beat the analysts expectation this time. The Nasdaq rating is at hold stock with tilt to buy.

#Nvidia's Q1 FY15 Results are out and have successfully beaten EPS expectation. Analysis of Q1 and Guidance for Q2. http://t.co/UsiatwYMIE — Usman Pirzada (@usmanpirzada) May 10, 2014