It’s not every day that I get to publish news about Tesla, Nvidia, the Model X and Jen-Hsun Huang in the same piece (well, actually, never). Today however, is that odd day, because Nvidia’s CEO has posted a picture of himself receiving his shiny new Model X P90D from Tesla Motors – probably as a congratulatory gift on a job well done. It’s worth noting that Nvidia is an important supplier for Tesla Motors and the on-board digital cockpit system is powered completely by Tegra chips. 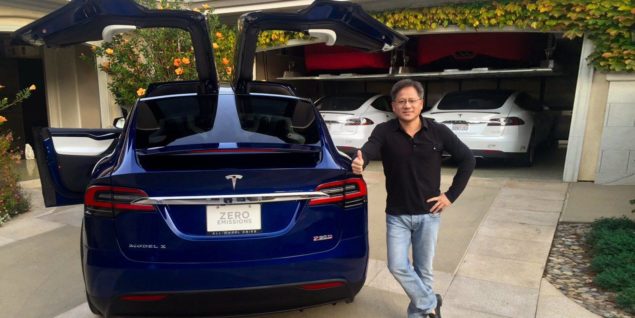 The CEO of Nvidia Corporation poses with a blue Model X. @Unknown

The picture shown below first appeared on Weibo and was eventually tweeted on Nvidia’s official page as well. It shows Mr. Jen-Hsun Huang posing with a new Tesla Model X and a car stable showcasing two white Model Ss and what appears to be multiple Ferraris – but ofcourse, they are covered  up, since this is pretty much a Tesla party. It does look like Mr Jen has a car for every day of the week - which comes with being the CEO of such a big company.

Nvidia has been supplying their Tegra chips and powering the on-board instrument cluster and the 17 inch screen. There is reason to believe that it has a substantial role in the ADAS system as well - but that has yet to be confirmed. What we do know for sure is that with the introduction of the Drive PX and Drive CX chips by Nvidia, it could become a much more significant player in future Tesla products as the company moves towards a future of fully autonomous cars. Green will be an absolutely critical ingredient in the perfect autonomous mix because they will be the ones providing the graphical horsepower to process all the information from the various sensors.

So it’s no wonder that Jen-Hsun Huang now has this awesome car in his possession from Tesla. Infact, this is probably a Signature model, if not a Founder Series model, considering that the delivery for reservation holders of the Signature Model X haven’t started yet. Elon Musk has been an active participant in Nvidia presentations involving ADAS and DNNs so it isn't really surprising to see Tesla this happy with Nvidia. Since we are on the topic, the Tesla Autopilot has caused quite a stir (in a very positive manner) in the Industry and might actually have jump started the transition to fully autonomous vehicles. And if there is one thing we can say for sure, it is that the transition will be powered with things that are small and green.

NVIDIA CEO: RTX Is a Home Run; I Look Forward to Upgrading Hundreds of Millions of PC Gamers