GALAXY Microsystems, or just Galaxy (GALAXY) is one of the leading AIBs of the world. The recently unveiled the monstrous GeForce GTX 780 Ti HOF V20 graphics card and are now gearing up for an even bigger reveal at Computex 2014. What they are basically demoing, in simple words, is secret sauce plain and simple. GALAXY has partnered up with DarbeeVision to bring "DVP-powered immersive experiences to the gaming industry".

Now you would be forgiven for not knowing what Darbee is. Basically Darbee is a hardware-based 'Darbee Visual Presence' Digital Resolver or video processer. In other words, it magically 'super resolves' the  visuals the DVP is receiving. In even simpler words, it is a very very intellgient form of Contrast, Sharpening and Depth Adjustment. Now there are certain tools that do something similar like the SweetFX suite, but most of them are manual and give a crude look if used improperly. The beauty about Darbee is that it enhances the image, without loosing visual fidelity and adjusts everything on auto. Lets take a look at some of the official samples attached by DarbeeVision: 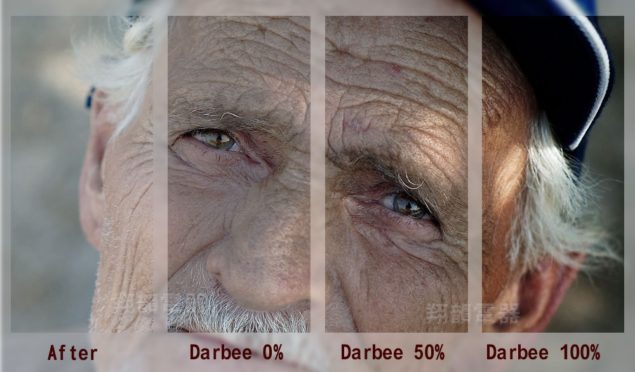 I am not really sure why there is a difference between 'After' and 'Darbee 0%' but I got to say, Darbee 100% looks damn amazing.

As you can see, this isn't your average sharpen filter. It is more intelligent than any software solution by several orders of magnitude, and the reason for that is simple: its a proprietary hardware based video processing solution. You don't see the over-saturated artifacts that are present in most off-the-shelf sharpening softwares. "We're thrilled to partner with Galaxy to bring DVP-powered immersive experiences to the gaming industry," said Larry Pace, President of DarbeeVision. "Together we plan to create a new benchmark in realism for the graphics industry by combining our new kind of video processing with their hardware horsepower, to optimize the visuals for the best gaming experience available".

Now heres the thing however, they did not mention just how exactly are they planning to combine a proprietary hardware video processor with thier GPUs and not to mention, whether Nvidia would approve or even allow such a thing. That makes me think that regardless of what the PR implies, the actual solution might not be integrated into the GPU but provided separately perhaps in the same box package. There is also a chance, that Darbee will provide their proprietary code to run natively on Galaxy GPUs via their bios, and that is much more likely than actual physical integration. It is even possible that they don't mean a GPU at all, rather a combined standalone product. Either way, Galaxy's graphics are just about to get a face lift and even though we don't know how they are planning to execute it, their Computex reveal queued for June 3-7 should be very interesting.