With September fast approaching, seems like flagship devices from the industry;s top manufacturers are in a rush to be leaked and provide us with their specifications. After we've seen numerous leaks about the iPhone 6S Duo, Samsung doesn't want to disappoint us either as the Galaxy Note 5 becomes the feature of yet another leaked today. Samsung's upgrade for the popular Note series has been in the news for quite a while now, and today we get to learn more details about it. 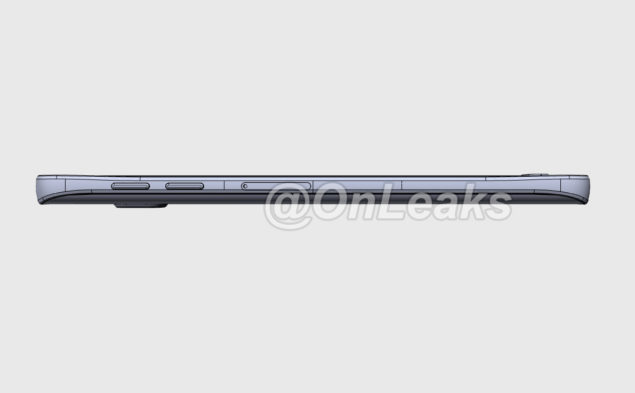 Courtesy of Onleaks, who has been quite active over the past couple of days, whether it be the Galaxy S6 Edge Plus or the Galaxy Note 5, we get to take a look at what the notorious leaker from France claims are some blueprints of the Galaxy Note 5. The left side of the device, as can be seen in the image above features the volume up and down buttons, coupled with a SIM card slot. The protruding camera, coupled with the sleep/wake button is also visible in the drawings, complete with a flash on the device's rear,, as can be seen below.

The bottom of the device is equipped with two rows of speakers, a USB connector port and a headphone jack. Unless Samsung chooses to do something amazing with the device's speakers, the Note 5 can be expected to have slightly above than average audio performance. If you're not interested in the just the technical details, and would rather prefer your devices looking more realistic, don't worry, we've got you covered there as well. HDBlog has produced some renders of the Galaxy Note 5, which starkly resemble the sets of images released today by Onleaks, with the only difference being that they look more realistic. So enjoy the renders below and let us know what you think in the comments section below.