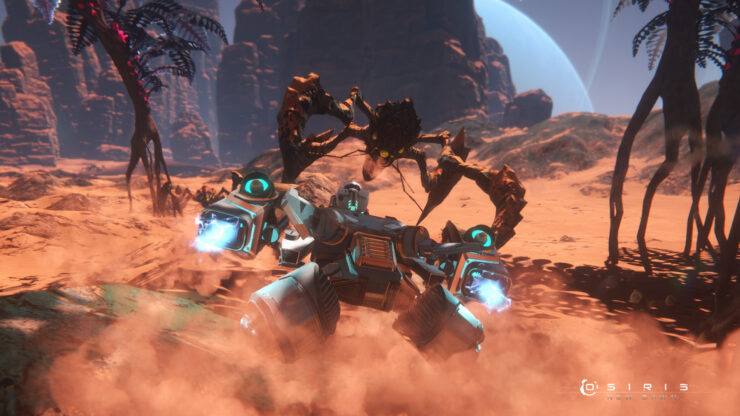 Soaring away through the universe in No Man's Sky has been a dream for many since the game was announced. Reality turned out to be much different when the game released, though, in a very disappointing way; the Twitter debacle from last week is just the latest episode of a sad series.

In the meantime, other fairly similar games have been released such as Osiris: New Dawn. Created by industry veteran Brian McRae with his studio Fenix Fire Entertainment, it launched a couple of months ago on Steam Early Access, something that perhaps Hello Games could have used in order to correct the course of its project.

Osiris: New Dawn is a much more focused experience, with combat playing a far more important role and multiplayer already working. So far, the approval rating is positive with a 78% recommendation from user reviews on Steam and the game is also in development for PlayStation 4 and Xbox One. We've chatted with Fenix Fire's CEO & Founder Brian McRae, who also offered his opinion on No Man's Sky, to find out more about the game's past, present and future. Enjoy!

Which books, movies or games inspired you for the concept of Osiris: New Dawn?

I’ve always been hugely fascinated by space travel, astronomy, planets and theories of alien life. Space is such a great backdrop for anything sci-fi related – I still have memories of watching the original Star Wars in the theaters back in ’79 (I’m dating myself, I know). I’m a huge fan of anything Ridley Scott has done as I think he has a great grasp on how amazing and terrifying space can be, especially in “Aliens”, “Prometheus” and “The Martian”. I also love “Starship Troopers” and I guess I wanted to bring that kind of fun experience to Osiris. I’ve also read The Martian and quite a few theoretical books about how we’ll travel to and live on Mars, in addition to countless fiction novels.

Several users commented the game's videos on our YouTube channel by saying 'This is what No Man's Sky should have been like'. What do you think of what happened with No Man's Sky? Was this debacle more beneficial or harmful for your game, given the similarities between the two?

It’s funny you mention the No Man’s Sky comparisons; when we debuted Osiris at PAX West, that was a surprisingly common comment from attendees and from media when they saw and played our game. At that time the negative NMS fallout was nuclear and from what I have read about the situation, it’s a very sad case of overpromising and under-delivering.

It’s hard to say if the whole NMS situation has been more beneficial or harmful in regards to Osiris. Obviously, given the negative criticism towards NMS, we were quite cautious on any negative fallout toward any space-based games and thankfully, we’ve had very positive response from editors and gamers alike. We made a very conscious decision to be as transparent as possible with the public in regards to our development process, updates, and more; that has made a very big impact especially on our forums and I truly believe that our constant daily engagement with our audience has made a huge positive difference. I hope other indie game developers take a similar attitude in being open with their audience – while in some ways I feel the NMS situation has “forced” developers to communicate more often and with greater clarity, that’s probably the best policy.

I also want to make it clear that the only real similarity between NMS and Osiris is that both games are based in space and have exploration and crafting elements – beyond that, NMS had a completely different endgame than what we’re intending, especially when it comes to multiplayer (e.g. we have it working).

The game recently released on Steam Early Access. What kind of feedback did you get from gamers so far and is there a particular area of the game that needs more attention right now?

Wow, the feedback has been nothing short of gratifying and humbling. When we launched the game, we thought we would be somewhere in the top 20 Steam games for a day or so – we ended up being the #1 Steam game for a whole week! The feedback has been great, refreshing, and voluminous! We’re constantly getting a lot of suggestions from the forums and there have been some great ideas, crazy bug reports, and criticisms. And with most criticisms, it’s usually with a positive tone as I think even harsh critics can see the great potential we have for this game.

How many planets are you planning to add to Osiris: New Dawn other than the starter one?

As Osiris takes place in an actual real solar system – the Gliese 581 system – we want to loosely base it off what we know of the system and take some creative liberties of what is not known about the system.  Right now, astronomers have classified 5 planets in the system so I think we definitely want to aim for 5 or more planets; in terms of moons or other celestial bodies, they aren’t certain so we’re going to have some creative fun with that.  Additionally, we’re in communication with the original Gliese 581 astronomer team as they’ve expressed interest in helping as much as they can.

Are there any plans to eventually expand the size of official servers down the road? It seems like this universe could be better populated by more than twelve players at once.

Oh yes, and that’s part of the reason we launched into Early Access – to see and experience what felt right in our game and to make fixes, add updates, and tune the gameplay especially when it comes to online.  With our latest round of optimizations we think we can get around 24 players per planet, and up to 50 players after another planned optimization. Also, these numbers are per planet, meaning that in a universe comprised of 5 planets and even more moons we can have hundreds, even thousands of players in a Solar System at any given time.

Why did you choose the Unity engine over the Unreal Engine 4 and CRYENGINE for Osiris: New Dawn?

We performed many tests early on in both Unity 5 and Unreal 4. Ultimately, we decided we can leverage our knowledge of art and environment rendering to push Unity, while leveraging Unity’s flexibility in how it handles physics and powerful scripting language. This has allowed us to have a game with full first person and third person support and lots of different control modes for vehicles: hovercrafts, wheeled vehicles, spaceships, rockets, and eventually space stations.

Since you worked on several tech demos for the Oculus Rift, it is a bit strange to find out that Osiris: New Dawn does not currently support VR. Is that merely due to resource management? With the game also confirmed for PlayStation 4, are you considering a PlayStation VR version?

We actually started this project as a VR experience with our earliest test taking place spacewalking around a docked space station. While these early tests were encouraging we quickly found it challenging to incorporate all the UI and gameplay intimacy needed to do the VR mode justice. I’m a big supporter of VR and I can see that as the next level of gaming. At the same time, VR is a big time commitment to do right – what I mean by that is, to truly have a VR experience, you simply can’t just add VR support onto a pre-existing game that hasn’t been fully realized for VR. I want to do VR right for Osiris: New Dawn, but let’s take the proper first steps.  The very first step is making the Osiris game as solid as possible.  Once we get that right, we’ll definitely look to getting proper VR support for Osiris, potentially for PlayStation VR as well.

How much of an improvement can players expect from your updates when it comes to performance optimization on PC? Also, do you intend to add support for multiGPU configurations?

Will Osiris: New Dawn release on Xbox One before PlayStation 4 due to the absence of any Early Access program on Sony's console?

We are looking closely at the Early Access program that Xbox One has, but we also have a great relationship with Sony. We looking to make a decision on our console platform plans very soon.

Which frame rate and resolution targets do you currently have for PlayStation 4 and Xbox One?

That’s actually impossible to specify at the moment as we are still 100% focused on PC. Our first console tests are starting within the next month.

What do you think of the upcoming PlayStation 4 Pro/Xbox Scorpio consoles and do you intend to support them? If so, what kind of improvements can we expect from the standard console ports?

I have to look closer at the technical specifications for both PS4 Pro and Xbox Scorpio, but from what I’ve heard it’s extremely promising. I really couldn’t say what type of improvements could be expected at this time though.

Will you enable cross-play functionality to let players of different platforms band together at some point in Osiris: New Dawn?

Cross play has been something I’ve been planning for since we broke ground on the project 5 years ago. What is interesting is that since we have a lot of back-end data we’re investigating ways to organize your colony and view your characters and base from a mobile device.  I’m not sure if we’ll be able to have Playstation players battle Steam players and so on, largely because of encryption guidelines that each console has to protect their players. But it’s definitely something we’re looking into. For now, I’ve got a game to make first! 🙂