[Update April 13th] Emily Rogers has recently shared more on the possible Wii U - NX ports. Apparently, the NX versions of the new Zelda and Super Smash Bros For Wii U / 3DS are almost guaranteed. The Splatoon and Super Mario Maker ports are not as guaranteed, as Nintendo has yet to find a way to deal with some issues regarding current player data, according to another rumor. 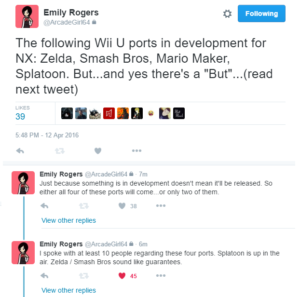 [Original Story] Even though we know nothing of the next Nintendo console, currently known as Nintendo NX, fans of the Japanese company are quite excited for it. Plenty of rumors on the actual hardware capabilities have been popping out frequently, and a few hours ago another rumor from a reliable source regarding games in development for the console have emerged online.

According to insider Emily Rogers, there are several Wii U ports currently in development for the Nintendo NX, with four of these ports coming for sure. Emily Rogers' tweets on the matter have since been deleted, though, but several reddit users have reported their contents.

With no hint on these titles, speculation is running rampart. With the recent rumor of the new Zelda game also launching on the Nintendo NX, that would leave only three other Wii U titles. Considering their success, it's likely that Splatoon and Super Mario Maker might be among the titles coming to the next Nintendo console. For the fourth title, Nintendo might want to capitalize on Super Smash Bros for Wii U and 3DS, launching a third version of the game, or give a second chance to high profile titles that have been released this year on Wii U, such as Pokken Tournament or the soon to be released Star Fox Zero.

Emily Rogers has also revealed some additional details on the new Zelda game recently, revealing that the game is indeed coming to NX and that it will include the ability to choose the gender of the playable character and that the game will feature voice acting for most of the characters with the exclusion of the playable character. Just like today's rumor, we must take everything with a grain of salt until Nintendo finally reveals its next console. Emily Rogers has a very good track record regarding Nintendo rumors, but treading lightly never hurt.